The King of Networking

Oddly enough, the restaurant of networkers, lobbyists, and EU meetings in Brussels is called London, after a place that left the EU in 2021. There are certainly other similar places in the city, but this one is right near the European Parliament, in Place de Luxembourg ("Lux", for insiders). I'm here to meet Frank Schwalba-Hoth, a former MEP, nowadays a networker. 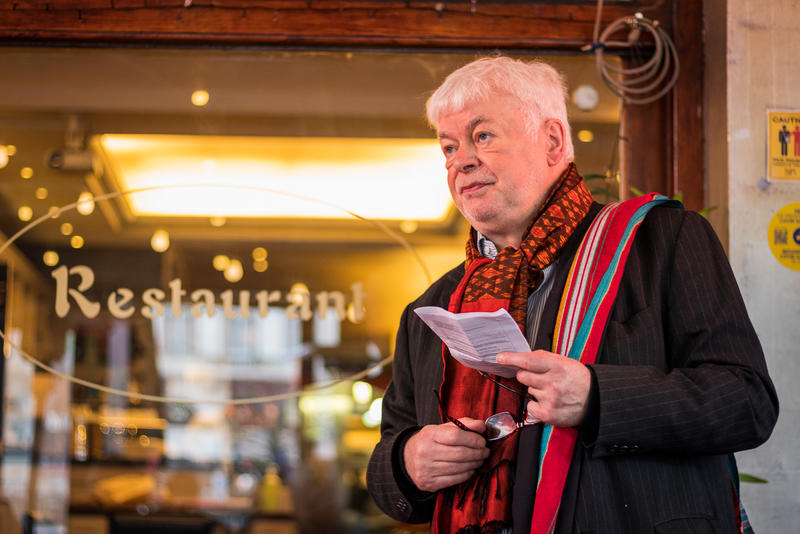 The king of networkingFoto: Hotnews

The purpose of the meeting: no particular reason, which seems strange in Brussels. He fished me in this restaurant a couple of days ago while I was there with a Romanian MEP. He completely overtook conversation by kneeling near our table and suddenly focusing on who I would be.

Then he sent an email with an invitation for a cup of tea together. At the London, obviously. I answered back: "Hah, you even remember my drink. One could write a lobby manual based on such things." I responded positively because I am interested in new business and opening up to new channels - and Frank seemed anything else than a typical person.

Frank was born in Hamburg, is now aged 69, and is a co-founder of the German Greens. I was curious about it all. The day of the meeting came, and I sat at the same table. Several minutes passed over meeting time. Suddenly, a group of five young, beautiful women burst into the place, with broad smiles on their faces. Oddly, they were smiling at me. I had a moment of confusion. Then I saw Frank behind them. He completely took over, as he had done the first time. Moved all of us to a bigger table and introduced me to the young ladies – students in politics and diplomacy from the former Soviet Union, Italy, and Ivory Coast and now visiting Brussels. 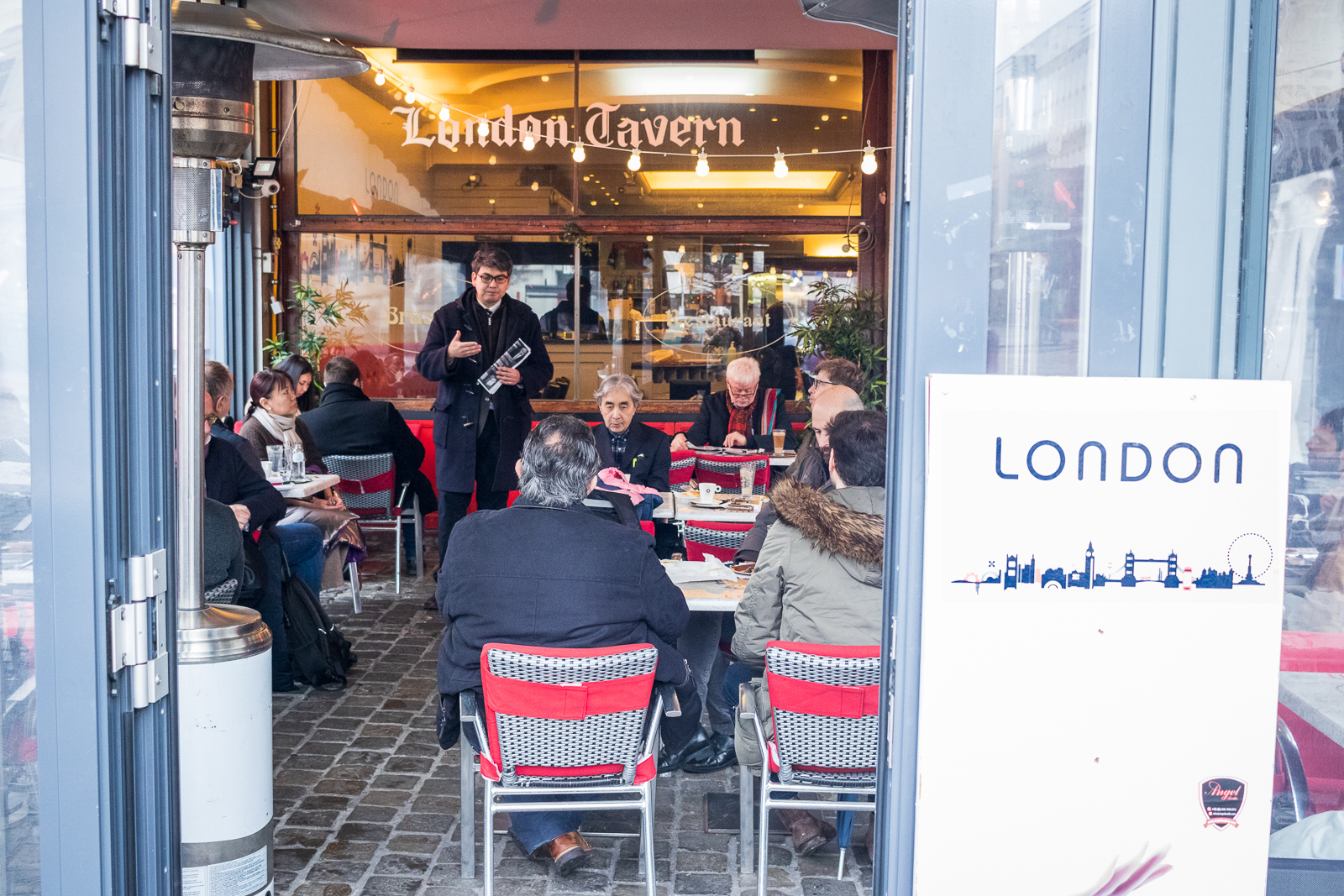 Frank laid out the rules of the game: I was to be some kind of living handout for a crash course on communication, consulting, and lobbying by telling my story and then answering questions.

I had become a captive of surprise, because of the smiling faces, Frank's inescapable courtesy, and my own ego. Frank nudged me to start my act. How is it to build a consulting company? Why did I do it? Which of my projects was the most extraordinary (and successful) so far? Why did I relocate from Bucharest to Brussels?

He was playing along all the time, interrupting me to add his own conclusions and stories. Since I am pretty self-deprecating, the part with the ego was not working out so well. Therefore, he started to prompt me:

"Do not say you started your company out of exasperation! Say it's the greatest thing that happened in your life."

"No! The correct answer is: I set up this first one, and I will be able to take care of all issues related to Romania brilliantly!"

Frank wanted to make a point to the audience, and he had found a shrewd way to do it.

Then he aligned me and the ladies for a group picture in front of the door. I felt like a political leader after a successful summit. Or like a sitting duck for Frank's camera.

The women left. Frank continued his furious and funny foraging into my past and mind. He was surprised that my move to Brussels had been linked to my wife, which has gotten a position at the European Commission. "That is wonderful!" he commented. "I will introduce you to other women who have lived just the opposite experience: in general, women mostly follow men!"

Frank is right, that is wonderful, actually - even though men do follow women in various ways. No need to get into details now.

Anyway, Frank had squeezed (nearly) everything out of me. In his networking book, it was time to tell his own story. Born somewhere near the border with Denmark, in the German land of Schleswig-Holstein, quite connected to that region, which I suppose has something to do with his green identity.

His move from politics to networking seems like a common thing in Brussels. Many European politicians stay after they finish their terms, to get into the European administration or to become networkers. Connecting people or problems with solutions is an acquired skill at this stage.

This is, more or less, the definition of political networking. There are other words for related activities. Lobby tends to mean representing someone's interests with authorities, while Public Affairs tends to replace lobby because of the bad connotations of the term. Anyway, don't ever call a lobbyist a lobbyist. They seldom do that themselves.

The isolation imposed by COVID created a problem for Frank. Since most political venues are no longer open for events, direct interaction is reduced to a minimum. He, nevertheless, figured out a way of putting people together in the mornings. This is also about London: since pubs and restaurants are still open, he organizes here meetings on hot political topics on Saturdays. There was one on Kazakhstan recently, while Kazakhstan was at its hottest.

Seems like a simple thing to do, but others don't do it. Brussels is empty these days. Frank figured out that the restaurant is happy about having customers on Saturday mornings. Customers are happy to polish their minds with a coffee or a tea and an issue that takes them out of their working week loop.

But there is something that Frank - and apparently others - are missing most because of the lockdown: his Soirée Internationale. A format he invented: mingling people together over dinner. Your initial chair is not guaranteed to be available for you during the whole evening. Consequence: the about 30 guests (all alone - without office or life partners) are confronted with the obligation to change tables after about half an hour, so interaction is catalyzed. Frank hardly waits to start this all over again. He's convinced good, pre-COVID times will be back soon.

In that spirit, he is approaching his next big event: the 2022 hand-over of the International Women's Leadership Award. Eight women, who "listened to their inner voice instead of following conventions", will receive their award from a Vice-President of the European Parliament.

I'm going out to have a smoke while Frank pays the bill. Tea makes me a low-maintenance guest. Good or bad? I'm reflecting. When I get back, Frank is stuck to a table where he's mesmerizing a beautiful lady that was grabbing a bite alone after work. The lady is obviously enjoying it. When he sees me, he interrupts: "Hooray! This is the guy that followed his wife to Brussels, although he was famous in his own country! Let me introduce you ..."

Sort of famous, I mentally answer – for a while, I went on TV and so on, more to experience what I was recommending to my clients. But I dare not say it because that might have spoiled the lady's smile - and Frank's routine. I've already become an accomplice, another chapter in the networking book.

We leave together. "Why did you want to meet me?" I'm asking Frank. "Well," he answers, "when I asked you what you normally do, you told me: 'I don't know if I'm normal, but I'm into consulting this and that...'" That sentence had attracted Frank, "I am not normal".

That was my catchphrase, I admit. And maybe you're my living Brussels handout, Frank. While walking towards the city centre, he tells me more stories. The building with a clock in front of the European Parliament dates from 1854 and was built as a special stop for the Belgian Royal family. Now it's become the oldest train station in the world. The cobblestones on Rue du Luxembourg are fake, made from concrete - not like in 1984, when he arrived in Brussels as the first Green MEP.

In contrast to all that we know about those people strolling around politicians and administration - private business interests, hidden reasons, and all that jazz – Frank's basic approach is enjoying people and charming them with nice stories and situations. There might be political action and money in it at a certain point - but it doesn't necessarily have to be, and if it will be, it doesn't have to be nasty stuff. I know because I did it a few times.

The three times I saw him, Frank was carrying around a big supermarket bag full of stuff. "This is a personal branding element," I remark while trotting together on the fake cobblestones. He looks back at me, a little bit amused, and says nothing.

"Do you know what C., the Romanian MEP, told me about you? She called you the King of Networking," I tell Frank. He laughs. He knows it's corny, but he seems to enjoy the label.

Frank's bag is the opposite of all those fancy cases or backpacks you would expect everybody to carry around in Place de Lux. God knows what he has in it (and I was too polite to ask), so the bag stands for mystery and carelessness about traditional social standards, which seems to suggest he has the upper hand in Place de Lux.

Or actually, I know what's in the big supermarket bag: all the people he ever met. I know because now I'm inside.

puiu v • 2022-02-04 19:12
Actually... //&nbsp..." Now it's become the oldest train station in the world..." is incorrect! By 1854, plenty of railway stations were in use in England, where the railways were first introduced.The oldest still operating station is Liverpool Lime Street Station, opened in 1836!The part about mesmerizing some beautiful young lady, kinda tacky!!!