DOCUMENTARY How did eastern Ukraine become a war front with Russia and what does the conflict that holds several million people "hostages" look like now?

Russia seized Crimea in three weeks and then began destabilizing eastern Ukraine, with paramilitary forces occupying key buildings in many cities in Donetsk and Luhansk regions in April 2014. The Ukrainian army then regained part of the territory, the Russians came back with heavy weapons and troops, and then, without great success, peace agreements were discussed. The conflict in Ukraine has been going on for five years and has left more than 13,000 dead and millions of refugees behind, but attacks and bombings continue to happen and people die on both sides almost daily. 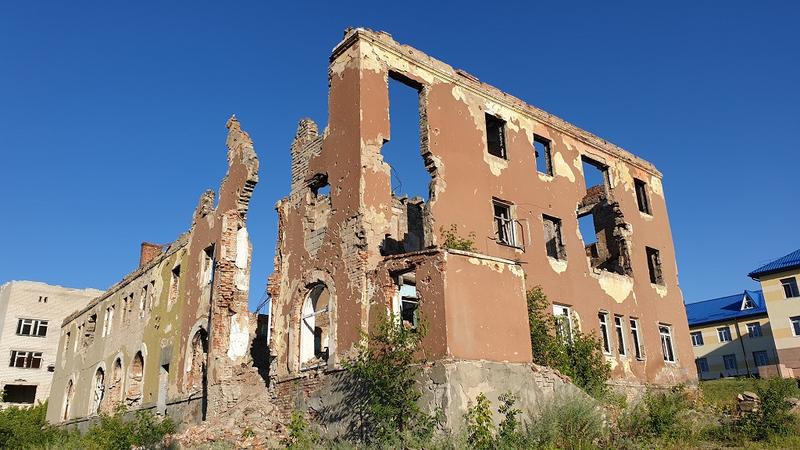 Ukraine has a total area of ​​603,000 kmp, and at present about 7% of it is under occupation (Crimea annexed by Russia has 27,000 kmp and the territories of Donbas occupied by pro-Russians have almost 17,000 kmp). The contact line in Donbas is 450 km long and the major cities occupied by separatists include Donetsk, Luhansk, Debaltseve, Horlivka and Alcevsk. From these areas about two million people left their homes and most became internal refugees on the territory of Ukraine. Some also chose to leave for Russia.

However, several millions have chosen to remain in the occupied areas, although many services are no longer functioning or are seriously affected: banks are no longer functioning, industry is affected, rail and air transport are almost gone, there are major problems with water supply, undrinkable in some places, the national currency can no longer be used, many jobs have disappeared, the entry to and from the territory controlled by Ukraine is done only through five road control points etc.

In ten months (between April 2014 and February 2015), the map of the region changed enormously due to the forces backed by Russia, forces that occupied institutions in cities west of the Donetsk region such as Kramatorsk and Slaviansk, and in May 2014 occupied part of the institutions in Mariupol, city on the Sea of ​​Azov coast.

In June and July 2014, the offensive of the Ukrainian army was successful and the territory held by the rebels decreased. Towards the end of August, the counter-offensive of the Russian forces became very aggressive and paid off: the city of Luhansk is occupied, but also Novoazovsk, in the south, while the port of Mariupol was again in danger. The pro-Russians won an important victory at Ilovaisk.

On September 5, that year, the first agreements were signed in Minsk, but were immediately violated by hard fighting at Donetsk airport.

The great powers met twice in Minsk (Belarus) to try to enforce the ceasefire: the first time in August 2014 and the second time in February 2015. But the provisions were not respected.

What were the main provisions from Minsk II:

- a complete and immediate ceasefire at midnight on February 15, 2015;

- withdrawal of heavy armament from the contact line until February 25, 2015;

- granting free access to OSCE representatives to verify that the first two provisions are respected.

The agreements were only partially respected and, just days after the talks in Minsk, the Ukrainian army was forced to withdraw from Debaltseve, a city recaptured by separatists and now under their control. Debaltseve is an important point for separatists, being placed on the main road between Donetsk and Luhansk. In addition, the separatists feared that another city they occupied in the area would be endangered: Horlivka.

However, since the signing of the Minsk II agreement, the intensity of the fighting has decreased and the demarcation line has not changed that much, but there have been isolated escalations of violence; there are fights daily and very often there are victims on both sides.

The Ukrainian front today: daily attacks and bombings. Dead on both sides

Representatives of the Ukrainian army say that in the face of the attacks of the separatists they cannot respond properly, as they respect the Minsk agreements and can only repel the attacks, even if casualtiues result often. Ukrainians also say that the Russians pay mercenaries, often low-income people, to fight on the side of separatists in Donetsk and Luhansk (Lugansk in Russian). Their commanders are undoubtedly Russians, say Ukrainian army officers.

However, Ukraine did not regain its occupied territories through Minsk II and among the few gains is the fact that the so-called people's republics were not recognized. On the other hand, Russia could not be sanctioned - the country led by Vladimir Putin denying involvement in the Eastern conflict. The eastern territories under occupation represent 2.5% of the surface of Ukraine.

For several years, the Minsk II agreements have maintained a low-intensity conflict, but one that is still killing people and that can last in this style many years from now on. But the general view is that a better solution is hard to find unless one element of the equation is radically changed, and most analysts in Ukraine and the West agree that if the Ukrainian army were to attack to recapture the territories, the Russians would respond in force.

Who is fighting Ukraine in the east: separatists or Russia?

Many times in the past Kiev politicians refrained to call the conflict that started in 2014 a "war", but army representatives now say, unequivocally, that they are at war and that there is clear evidence that the Russians started everything.

Who is the Ukrainian army fighting with? There have often been categorizations such as separatists or terrorists, but those in the Ukrainian army say they are facing "Russian invaders" or "Russian occupation forces", as their ties with Moscow are certain.

"It's war. It's a hybrid, but it's a war", says one of the Ukrainian commanders on the front.

But Kiev officials are also providing up-to-date figures on the enemy they are facing: somewhere between 20,000 and 35,000 separatists and mercenaries, supported by several thousand Russian soldiers and officers (including generals) who come by rotation to take control and to guide the fighting forces against the Ukrainian army.

Occupation forces are supported by Russia directly and by military technique, weapons, ammunition and supplies - Ukrainian officials say. according to them, the entire occupied area of ​​Luhansk and Donetsk is full of tanks, rocket launchers, armored vehicles, heavy weapons, mortars, cannons and mines.

In fact, constantly the Ukrainian military on the front meets newer and newer weapon types that can only come from Russia - from drones to electronic jamming equipment.

Moreover, on the border with Ukraine, Russia has mobilized several tens of thousands of military personnel who are constantly conducting military exercises. They have hundreds of tanks, hundreds of helicopters and attack planes, thousands of armored vehicles and artillery weapons.

According to information presented by Kiev officials, all these Russian forces could be mobilized in less than 72 hours in the event of a direct intervention in Ukraine.

However, since the signing of the Minsk II agreement the intensity of the fighting has decreased and the demarcation line has not changed much, but there have been isolated escalations of violence; daily fights and very often with victims. 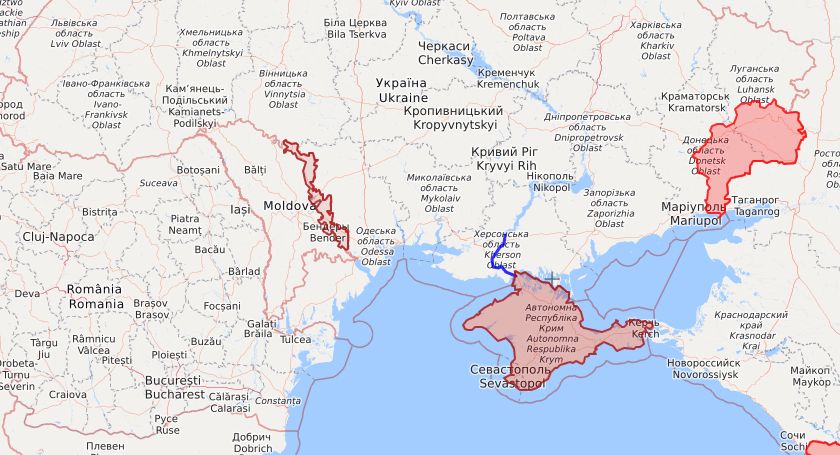 The Russians violate the Minsk agreements on a daily basis, say representatives of the Ukrainian army, which often publishes newsletters on operations. Here's what a bulletin looks like on July 14: "The Russian Federation has violated the ceasefire agreement 19 times, using six times prohibited weapons under the Minsk agreements. (...) The enemy fired at our units with 120 mm and 82 mm mortar, used various grenade launchers, weapons on infantry vehicles, heavy machine guns and small caliber weapons. ”

On July 18, a Ukrainian soldier was wounded, Russian occupation forces initiated six attacks, and Ukrainian defenders retaliated with gunfire. On July 19, a Ukrainian, but also a Russian soldier was killed, and the attacks were widespread on the contact line (at Pisky, Troitke, Kamianka, Vodiane, Pavlopol, Lomakyno and Pishcvik, in the Luhansk region, and in Maiorsk, in Donetsk region).

TIMELINE for the conflict in Donbas

February 27: Russian forces occupy the Crimean Parliament in Simferopol. The first information about "green men" appears on the peninsula.

March 16. The Russians are holding a so-called referendum in Crimea. Two days later, the Moscow Duma votes to incorporate the peninsula into the Russian Federation.

April 12: Separatists attacked the city of Kramatorsk, where fighting would take place until July. The Ukrainian army won various positions, and opponents gained part of them in June after tank attacks. In early July, the separatists were removed from Kramatorsk, a city now more than 50 km from the contact line.

April 12: The insurgents captured Slaviansk, a city where bloody battles were to take place.

April 17: Putin talks about the concept of Novorossia, trying to bring a historical motivation for the aggression in eastern Ukraine. Russian ideologists would have wanted a confederation to proclaim the "people's republics" in Odessa and Kharkov, as well as in Donetsk and Luhansk, and to establish a confederation that would include as much of the east, south and south-eastern Ukraine.

May 2: The disturbances caused by separatists reach hundreds of kilometers from Donetsk and Luhansk, in Odessa. 42 people, most pro-Russian activists, die in a building in flames.

May 9: The insurgents take control in Mariupol, an important port on the Azov Sea and an essential economic center in the region. Government forces regain complete control on June 13.

May 11: After the so-called referendums, the "People's Republics" of Donetsk and Luhansk proclaim their independence. Neither Ukraine, nor the West recognize them.

May 25: Petro Poroshenko is elected president of Ukraine and promises to liberate the occupied territories from the east.

July 5: The Ukrainian army released Slaviansk, a city where the headquarters of Igor Girkin (Strelkov), a well-known Russian general and former lieutenant colonel in the military secret services, had been established.

July 17: Flight Malaysia Airlines MH17 is shot down by pro-Russian rebels with a missile system brought directly from Russia - 283 people died. The plane crashed near the village of Hrabove, in Donetsk Oblast and the conflict was brought to the attention of world public opinion.

August 5: A spokesman for the Ukrainian army says Russia is consolidating consistent forces at the border: 45,000 troops, 160 tanks and 192 military aircraft.

September 5: The first Minsk protocol was signed, which failed to stop the fighting.

September 6: The clearest proof that the Minsk agreement is a failure: pro-Russians start bombing Mariupol port.

November 7: Russia sends in the Luhansk region a column consisting of 32 tanks, 16 pieces of heavy artillery and 30 trucks with weapons and ammunition.

November 30: Russia sends a "humanitarian" convoy to eastern Ukraine, but authorities are protesting and saying it is actually about military equipment for separatists. It is the eighth such convoy.

December 26: Ukraine and the pro-Russians exchange hundreds of prisoners.

January 14: Pro-Russian forces attack Debaltseve, a city with 20,000 inhabitants in a strategic position. By July 2014, Kiev had regained control of the city.

January 21: The Ukrainian army withdraws from Donetsk airport. The pro-Russian rebels parade with the prisoners in a symbolic gesture.

January 24: 30 people were killed by a rocket attack in Mariupol, missiles fired from the separatist area.

February 20: Pro-Russians oust Ukrainian troops from Debalțeve, one of the bloodiest battles in the east. The defeat sparked a shock wave in Ukrainian society.

Since then, the fighting has continued. There are periods when their intensity is high, and the number of victims has exceeded 13,000 people in five years.

There are daily attacks and sometimes the entire length of the front, with both low caliber and heavy weapons. The Ukrainians say that the front line is stable and that the army is trying not to respond to the challenges coming from the pro-Russians, but only to maintain their positions.

An extremely important event in the region is the construction of the Russian bridge across the Kerch Strait, a 3 billion euro bridge, built between 2015-2018. The bridge economically affected the ports of Mariupol and Berdiansk, where activity decreased by 30-50%.

In recent weeks, Putin's decree was intensely discussed, whereby several categories of Ukrainian citizens will be able to hold a Russian passport. Ukraine has denounced the measure and says Russia is doing everything it can to erode Ukraine's sovereignty.

Original version of this article (in Romanian),appeared here.