Romanian President Klaus Iohannis would receive 42% of the votes, should presidential elections take place tomorrow, according to a new poll by polling institute IMAS, which comes with striking results for other top politicians. 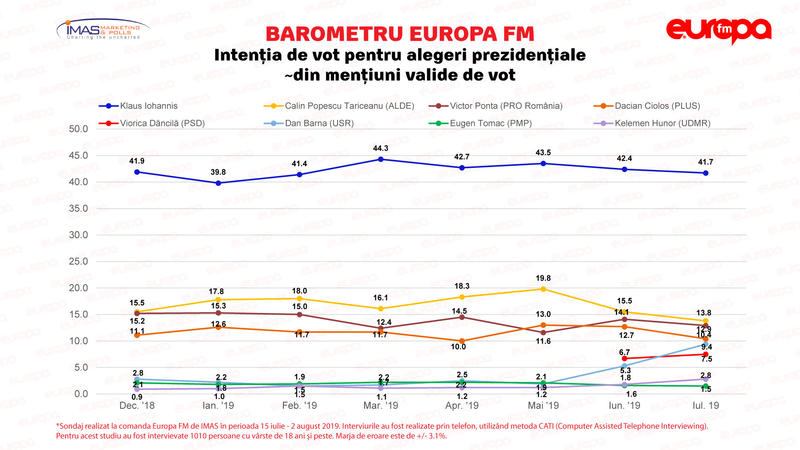 The poll, ordered by Europa FM radio channel and based on information collected July 15-August 2, shows Calin Popescu Tariceanu, Senate speaker and leader of ALDE, a minority member of the governing coalition, second in voters' preference, way behind Iohannis.

Tariceanu would get 13.8% of the votes, the poll shows. Third would be former Social Democratic PM Victor Ponta, currently leader of a new political group, with 12.9%.

Fourth would be Dacian Ciolos, one of the leaders of the USR-PLUS opposition alliance. This alliance planned to push its other leader, Dan Barna, for president, with Ciolos considered for prime minister in case of a general elections victory. But Barna would only get 9.4% of votes in presidential elections, should such a poll take place tomorrow, as compared to 10.4% for Ciolos.

Current prime minister Viorica Dancila, leader of the governing Social Democrats (PSD), would only get 7.5% of the votes.