Romanian President Klaus Iohannis holds a major lead over all other candidates in presidential elections due to take place in November, according to a new opinion poll. The study shows a surprise second candidate, far behind the incumbent. 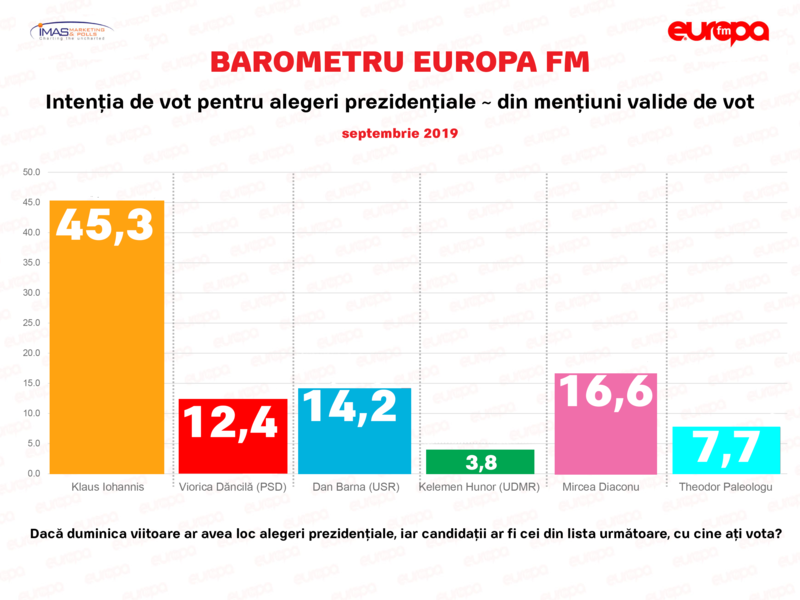 The study by IMAS polling institute for Europa FM radio station places Iohannis as clear leader: some 45.3% of voters would pick him, should presidential elections take place next Sunday.

Second comes Mircea Diaconu, an actor who has served as MEP and who has long been seen as close to the Social Democrats (PSD). He is now supported for president by the new party of a former PSD leader, Victor Ponta - the one who lost the elections against Iohannis the last time around. Diaconu would claim 16.6% of the votes.

Third comes Dan Barna, the leader of the USR party who runs for the opposition USR-PLUS alliance, with 14.2%.

And fourth comes PM Viorica Dancila, the leader of the governing Social Democrats (PSD), with only 12.4%.

Way behind with 7.7% is Theodor Paleologu, the candidate of the PMP party.

Meanwhile, the party associated with Iohannis, the Liberals (PNL, main opposition party) would claim most votes should parliamentary elections take place next Sunday, with the support of 27.7% of voters. The governing PSD is credited with 19.5%, and USR comes close behind with 17.9%.

Ponta's Pro Romania comes next with 9.1%, ALDE with 6.2% and the group led by former European Commissioner and technocratic PM Dacian Ciolos, PLUS - with 5.7%.