US Ambassador to EU says Romanian minister invited to work on "advisory roadmap" to strengthen Romanian rule of law / What he said on Huawei, Russian gas

The US Attorney General has invited Romanian justice minister Ana Birchall to work together on an "advisory road map as to what the US believes are appropriate provisions and measures to take in legislation and in executive orders to ensure a strong and consistent rule of law" in the East European country. The statement was made by Godron Sondland, the US Ambassador to the EU, who just visited Romania just after meeting with newly chosen EU leaders and hailed a "reset" in US-EU relations. 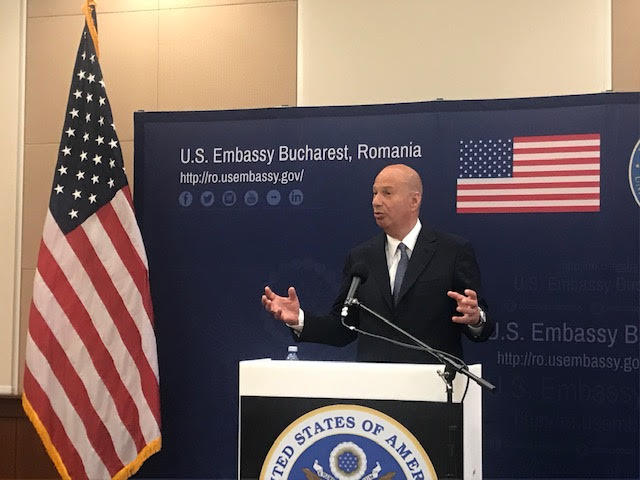 When prompted on the stance of the US, under President Trump, on rule of law in Eastern European countries, Sondland said in a press conference in Bucharest on Thursday:

His statement came as Attorney General William Barr in August invited Birchall to Washington just as Romania's PM Viorica Dancila was about to replace the minister with a more controversial personality in a government reshuffle.

Ambassador Sondland was in Bucharest for talks with President Iohannis, PM Dancila and minister Birchall.

Prompted during the press conference about Huawei technologies that might be considered in EU countries for 5G services, he pointed out to a memorandum of understanding signed by Romania in Washington last month:

Asked even about the interest of the Chinese of investing in Romania's only nuclear plant in Cernavoda, on Danube river, he said: "We are encouraging our friends and allies to look elsewhere for all of their needs, not only 5G."