VIDEOREPORT The electric motorway in Sweden where trucks ride like trams

Near the Swedish town of Sandviken, about 190 km north of Stockholm, a portion of the E16 motorway was electrified - with pillars on the sides, as we see on railways, and electrical cables stretching over the first lane. Hybrid trucks run on this section are are powered by electricity through a pantograph mounted above the cabin, similar to what we see in trams. 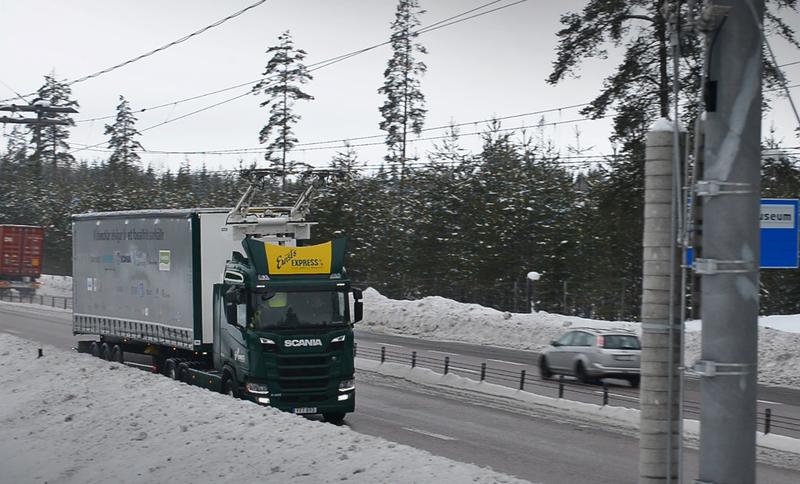 It is a pilot project, co-financed by the European Union, which is beginning to be tested in Germany and the USA as well, and in the next decade there is a great chance to see more and more European roads modified in this way.

VIDEOREPORT - The electric motorway in Sweden:

"It is a catenary system that uses a pantograph mounted on a heavy truck with an electric drive train. In this case two hybrid trucks from Scania that can be dynamically charged when running on the E16”, explains Magnus Ernström, the Swedish owner of the project.

The trucks can instantly switch from the electric drive train to the 9-liter biodiesel engine, so they can overtake and change the lane when needed, he explains.

Why this system and not a network with charging stations? "This is a project aimed at finding new ways of running fossil free heavy transportation. (...) Our practical system allows the installation of smaller, lighter batteries, considering that the vehicle can go directly on the current in some portions, but also the possibility of charging the vehicle while continuing on the freeway, without having to stop and charge the batteries", replies Ernström.

A 120-year-old technology, put into work only now

"You just use any electric drive truck and then you put a pantograph that connects electricity from overhead lines, just like a tram or a trolleybus. But it can do it at full speed along the highway", says the swede.

"This is basically 120 years old technology, but the two parts that have been missing is the hybrid technology for the trucks that make them seamlessly switch from one drive to another. And then there are the sensors that make this pantograph find and stay at the power lines regardless wich way you turn with the truck", explains Ernström .

What about the looks - the pillars and cables running along the road? "They're not beautiful, this poles. We are aware of that. We always saw this as one of the big threats - the 'ugly factor'. But a lot of think they look nice as well", says Ernström.

It costs 2 million euros per kilometer, but it can be built around existing infrastructure

The project was launched in 2016 and will continue in the coming years with the electrification of another 40 km, between industrial areas and the Swedish port Gavle, so that many of the freight companies can fully use the system. Until then, the Swedes have to identify which is the most suitable business model, who pays what and how.

The cost of building the infrastructure is about 2 million euros per kilometer for both directions of traffic, but the developers of the project argue that it is not necessary for a road to be electrified everywhere. Rather only certain portions - where traffic is more intense, where there is information that a truck consumes more, up-hill fro example, while on other sections the trucks can go on batteries or make the instant switch on bio diesel.

In any case, the trucks can run constantly with 90 km/h, regardless of the traction mode or whether or not they are connected to the catenary.

"We could've built a longer stretch of road, practically. But we wanted to see on a smaller scale to see if it's a good idea. We are going to run this project for at least this year and then we want to build another stretch of road that is a bit longer, to try the whole system, the whole business model - who own what and so on", says Magnus Ernström, the owner of the project on behalf the Swedish authorities.

For the trucks themselves, however, the costs are higher than in the traditional ones, explain the project managers. In the hybrid version, a truck can cost about 10.000 euros more than a traditional one, and the pantograph made by Siemens for this project currently costs around 40.000 euros. "These costs will be greatly reduced when we discuss large-scale production", says the project manager in Sweden.

What the Swedes have developed and tested in recent years will be implemented as a test in three locations in Germany as well as in Los Angeles. The advantage of the system, say Swedish developers, is that it is quite simple, easy to adapt to existing infrastructure and vehicles today, and does not require a specialization of drivers.

"We want to prove that it can be built on the public road - legally, practically from a maintenance perspective and from a safety perspective. We want to show it works in everyday use", says Ernström.

"It's one of the parts that can solve the fossil free heavy transportation of the future. It's not the only part, but it's one of the technology that can be an important part of the overall solution in the future", says Magnus Ernström.