British Minister for Europe David Lidington says fight against corruption is the responsibility of each member state, speaks on Romania-UK relations, Moldova, migration

The existence of a European strategy against corruption with a mechanism to monitor corruption in all member states - an idea advanced by Romanian MEP Monica Macovei - does not seem to please everybody. British minister for Europe David Lidington showed in an interview for HotNews.ro during his visit to Bucharest this week that it should be the responsibility of EU member states to fight corruption individually. He also speaks in his interview with HotNews.ro about migration, bilateral relations, and Moldova. 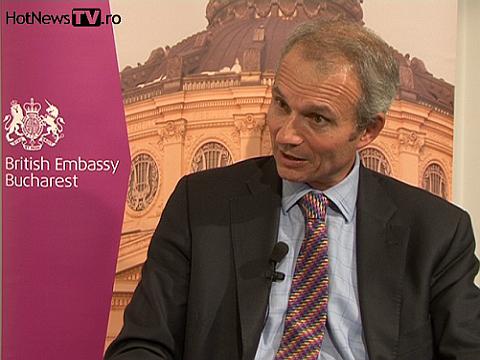 Romania and Bulgaria are the most corrupt EU countries. But corruption is not a phenomenon specific to these two countries - an argument invoked by Romanian MEP Monica Macovei who last week proposed a European strategy against corruption which would include e mechanism to monitor corruption in all EU member states.

Things should be looked at in detail, David Lidington said. He said it was important that a European strategy complied with the competence of member states and that Britain would not accept another transfer of power from the UK Parliament to European authorities. The responsibility to fight corruption themselves should not be taken from the governments of EU member states, he said.

On the issue of Rroma people, which has become a European, not only Romanian-French issue, he said it should be discussed calmly. He said recent statements made by European Commissioner Viviane Reding related France actions in this regard were "unfortunate". He said that while all EU citizens have the right to travel to other member states for work, any member state has the right to act on citizens who are living on its territory illegally, but in a distinct and indiscriminate manner.

What he said on the visit to Chisinau and Bucharest

What he said on the Co-operation and Verification Mechanism (CVM)

What he said on Romania’s role in the EU, the UK-Romania partnership

On Eastern neighbourhood and Moldova