Romanian businessman and politician Gigi Becali received on Monday a 3-year sentence with conditional suspension of execution in a case in which he was charged with forcefully retaining several people involved in a car theft. Becali, best known as the man who controls Bucharest football club Steaua and as a former member of the European Parliament turned member of the Romanian Parliament - is not in Romania for the moment. He announced last weekend that he was in Dubai and would not return before the court sentence. 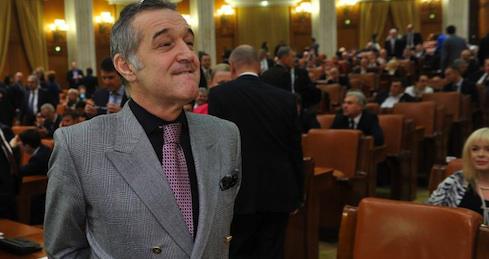 The sentence was given by the High Court as prosecutors challenged a previous verdict in which the people indicted in the case, including Becali, were acquitted.

Becali had previously said he would flee the country should he be convicted in the case. But he reconsidered and told RTV news station on Sunday that he would put an end to speculation about his leaving the country: "I've already paid for my tickets back home" from Romania.

Gigi Becali was charge with ordering his personal bodyguards to catch the men who had stolen his car, a Mercedes, several years ago. The thieves were taken to the party he led at the time, the New Generation party, where the men were retained for several hours. A High Court verdict in 2011 acquitted Becali and other people charged in the case, but prosecutors and several of the indicted appealed and the case returned to the high court.

Gigi Becali, a former MEP, ran on the lists of the National Liberal Party (PNL), a part of the governing Social Liberal Union coalition, in parliamentary elections and won a seat in the Romanian Parliament late last year.