​A Canadian company's plans to dig for gold in Rosia Montana, Romania, which has sparked disputes for a decade and a half, threatens to come to an abrupt end as a series of unprecedented protests have forced the Bucharest government to step back and announce the "closure" of the project. Still, the announced decision has yet to be made official by a vote in Parliament, which may come in the upcoming days or weeks. The protests, attended by many young people and in contrast with what Romanians are used to in terms of anti-government demonstrations over the past two decades, forced authorities to step back with their approval of the Rosia Montana Gold Corporation (RMGC) project on Monday. The Victor Ponta-led executive is now caught between the promise to drop support for gold mining in Rosia Montana, threats of legal action by the company that runs the project and protests by mining supporters. 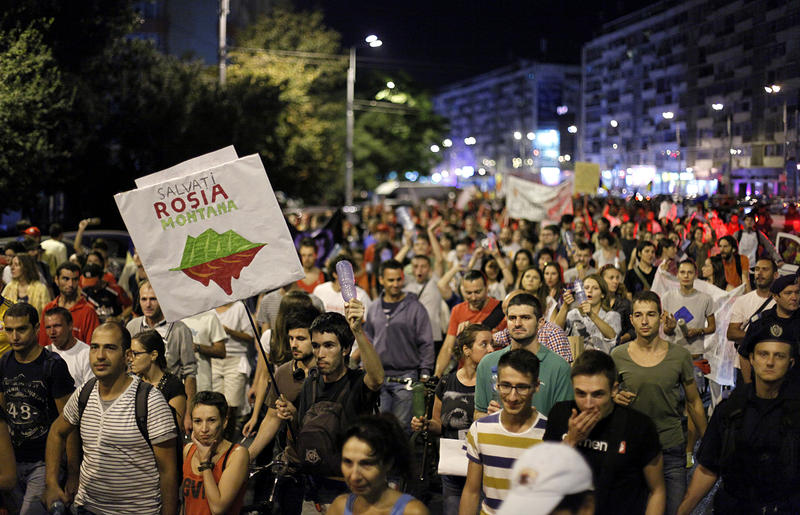 Plans to start gold mining in Rosia Montana in Western Romania have been discussed since the nineties. For years, Rosia Montana Gold Corporation and its main stakeholder, Canadian mining company Gabriel Resources, have poured large amounts of money in trying to draw support for the project, but opposition has been strong locally. The "war for gold" in Rosia Montana has sparked many controversies and reported many ups and downs over the past decade.

On August 27, the government led by Social Democrat (PSD) Victor Ponta announced its official support for the Rosia Montana mining, despite that the governing coalition had said, when in opposition, that it was opposing it. More than that, when in opposition, PSD had allied with environmentalists on the issue in an attempt to get the votes of this segment.

The August 27 decision prompted protests across the country starting September 1, attended by thousands of people. The protests have continued mostly in Bucharest ever since.

Last week, despite his government having approved the project and passed the bill to the Parliament for debate and final approval, Victor Ponta announced he would oppose it as a member of the Parliament. Senate speaker Crin Antonescu, who heads the other major party of the USL governing coalition, the National Liberal Party (PNL), eventually announced his opposition to the project.

This was the moment that determined PM Ponta to announce the "closure": losing the support of the governing partners (who for their part also voted in favor of the project at government level) and amplifying street protests seem the reason that prompted PM Victor Ponta to say on Monday, September 9, that the project was "closed". He also said he expected the mining company to claim compensations but that the government would not carry any responsibility in such a case.

The "closure" announcement does not mean troubles have come to an end for the Ponta Government. The vote in Parliament over the government bill has yet to take place and many MPs have publicly said they deemed the project as good for Romania. Gabriel Resources Ltd shares slumped more than 70 percent at the Toronto exchange on Monday and the company announced it could consider legal action against the Romanian executive's decision.

Meanwhile, protesters in Bucharest gathered for a ninth night of protests on Monday evening, saying they would not back down unless official decisions are made to put an end to the gold mining project, as well as to shale gas exploration plans and other environmental issues.

And on Tuesday people of Rosia Montana - a very poor village situated in an naturally wealthy environment also hosting archeological riches - started protests against the announced "closure" of the mining project. They argued mining was the only source of living in that area.

The protests in Bucharest have also drawn attention to political and social pundits. They have drawn thousands of people, mostly young, who opted to protest about an environmental issue and the environmental policies of the Romanian authorities, as well as the "silence of the media" . The peaceful demonstrations came in stark contrasts with what Romanians are used to in a country where protests over past two decades focused mainly on political conflicts, salaries and unemployment.

The demonstrations against Rosia Montana gold mining, overlapped, in Bucharest, with protests by people angry with the increasing number of stray dogs in the city. These demonstrations started after stray dogs killed a small boy in a Bucharest park, after years and years of local authorities - currently dominated by the governing coalition - doing nothing to deal with the stray animals problem in the city.