NATO Secretary General Anders Fogh Rasmussen said in an interview with HotNEws.ro on Thursday that Russia's "illegal" military actions in Ukraine have changed the security situation in Europe "dramatically". He said during a visit to Bucharest that he expected a NATO summit in September to discuss long term measures to enhance the collective defense of member countries. Rasmussen also spoke of how the Russian misinformation campaigns try to influence decision making in NATO member states and and of an increased intelligence activity by Russia. 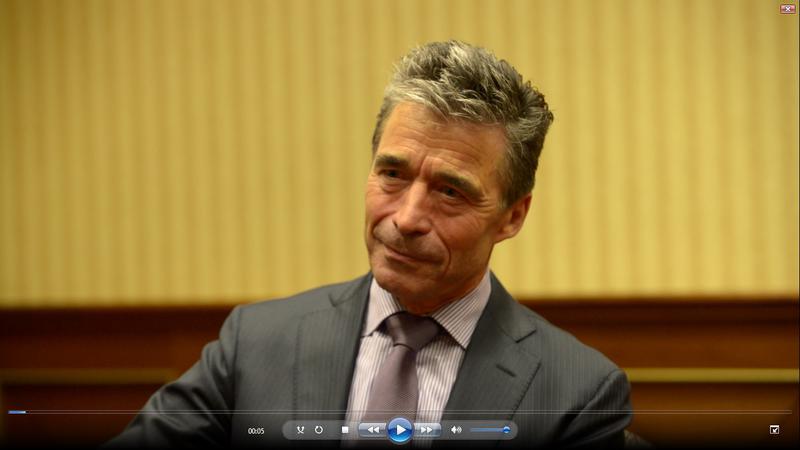 HotNews.ro: Romanian officials have asked for a permanent NATO base here in Romania. Are we going to have one?

Anders Fogh Rasmussen: We are now considering which further steps we should take to further strengthen our collective defense and of course that will also include considerations on what we call appropriate deployment. It's a bit too early to say exactly how and where, but be sure we will not hesitate to take all the necessary steps for as long as required.

HotNews.ro: Can we expect such a discussion to be held in Wales in September?

A.F.R.: Yes, I would expect the NATO summit in Wales in September to take decisions on long term missions to enhance our collective defense. Because this is the call of our alliance, to privide effective defense and protection of our allies.

HotNews.ro: We saw lately a lot of measures taken by NATO to reassure allies, Romania included. What NATO movements of troops or equipment should we expect here in Romania?

A.F.R.: Well, we have already taken some steps, as you mentioned. We have deployed AWACS surveillance aircraft to improve our surveillance over Poland and Romania. You have seen more naval presence by major allies in the Black Sea. And further steps may be taken that would include an update of existing defense plans, the development of new defense plans, enhanced military exercises and, as I said, appropriate deployment as well.

A.F.R.: We never comment on the existence of contingency plans. But I can assure you that we already have all plans in place to insure effective defensive protection of all allies. Of course, the new security situation after Russia's illegal military actions in Ukraine makes it necessary for us to update existing plans and also to develop new plans.

HotNews.ro: So you are saying NATO is developing new plans for its allies. What does this mean for Romania?

A.F.R.: As a matter of principle we never comment on the details of our defense plans. But as I said I can assure you that as the world's stongest millitary alliance we do have all plans in place to insure effective defense of all allies against any threat. But the Russian behaviour in Ukraine has created a dramatically new security situation in Europe. And, of course, that makes it necessary for us to update our plans and develop new plans.

HotNews.ro: Speaking of Russia, do you have any evidence at all of Russia pulling its troops from the Ukrainian border?

A.F.R.: No, and that's a clear answer from my side. We do not have any visibile evidence of a Russian withdrawal of military forces from the Ukrainian border. Actually, we have seen similar announcements from Russians in the past without any withdrawal of Russian troops. We are very, very cautious when it comes to such statements. That is the reason why we continue to urge Russia to pull back its troops.

HotNews.ro: The romanian president said in a statement that he thinks that Russia wants to control the Danube river mouth. Do you have the same intelligence?

A.F.R.: Again, we never comment on intelligence. But there is no doubt that the illegal military actions in Ukraine go beyond Ukraine. This is about a long term Russian goal to re-establish the sphere of Russian influence in the former Soviet space. And that includes many things. Also, the Russian interest in prolonging the conflict in their near neighborhood, like in Transnistria, Abkhazia, South Ossetia, now the illegal occupation of Crimea as well. And the Russians choose this protracted conflict to prevent these countries from seeking Euro-led integration into the EU and NATO.

HotNews.ro: Speaking about Russia's behaviour, do you fear Russia will try to destabilize the Republic of Moldova in the next weeks, just before signing a crucial treaty with the European Union?

A.F.R.: I have no doubt that Russia will increase pressure on Moldova, maybe also Georgia in the run-up to the finalization of this association agreeement. We have seen that in the past, we will see it in the future as well. Because that is the overall goal of Russia, to prevent these countries from seeking closer relations with the European Union and NATO.

HotNews.ro: Norway, Sweden, even Hungary spoke publicly about an increasing Russian intelligence activity on their own territories. Do you have information about such a growing activity in Romania as well?

A.F.R.: No doubt that there is a growth in Russian activity which also goes beyond the traditional intelligence activity. We see clear evidence that Russia is also heavily engaged in spreading misinformation, its misinformation campaign, which includes influencing media as well as NGOs. So it's a very sophisticated approach with the aim to influence the public opinion as well as political decision making processes in allied nations.

HotNews.ro: The German secret service is worried about Bulgaria responding to the Russian command. We've seen an article published in the German press. Do you have similar worries about Romania, too? Being controlled by Russia somehow?

A.F.R.: Well, I've just visited Bulgaria and I have no reason to doubt Bulgaria's commitment to our allies as well as commitment to its EU obligations. But clearly Russia is very active, also when it comes to Bulgaria.

HotNews.ro: And what about Romania?

A.F.R.: I don't have concrete examples, but I would be surprised if Russia isn't active in Romania as well.

HotNews.ro: We have a political fight between the prime minister and the president here in Romania about the Supreme Defense Council pronouncing itself on Russia or not. Can this be seen as a sign of weakness in an allied country?

A.F.R.: I'm not going to comment at all on domestic affairs in Romania.

HotNews.ro: Ukraine is in such a critical point also because of the corruption and because of the oligarchs who have such a huge power that they threatened the state itself. It's not me who's saying this, but the former Secretary of State Hillary Clinton. Do you think this corruption is also a danger in other Eastern European countries?

A.F.R.: I think the effort to fight corruption is a long-lasting effort and all governments should focus on that. It was one of the accession criteria for joining the European Union as well as NATO that governments commit themselves to a determined fight against corruption. So whenever we see examples of corruption, it should be punished severely and governments should devote a lot of efforts to fight that scourge.