Romania is for the first time amongst Knight News Challenge winners with a consortium of EurActiv.ro & RISE Project - OCCRP

The Romania-based project "Who are the gatekeepers of the Internet, cable and satellite infrastructures in Eastern Europe? Mapping and investigating media distribution providers" was among the nine projects selected for funding by the Knight News Challenge. The Knight Foundation organized on June 23 the MIT-Knight Civic Media conference "The Open Internet and Everything After", in order to present this year's granted projects of Knight News Challenge. 704 applications have been submitted, with nine projects selected for funding. 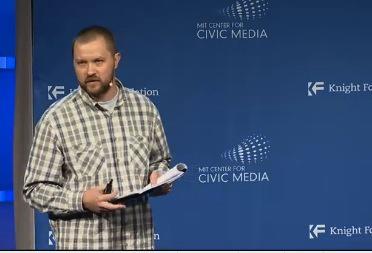 The Knight News Challenge Announcement took place in Boston during MIT-Knight Civic Media conference, "The Open Internet and Everything After". The Romanian proposal awarded with a grant was presented on stage by Dan Tapalaga, from Hotnews.ro, on behalf of European Actors Association (EurActiv.ro)

The announcement of the winners (you can see Romanian journalist Dan Tapalaga presenting the project at min. 01.10.57)

The Knight News Challenge on strengthening the Internet is funding breakthrough ideas that strengthen the Internet for freedom of expression and innovation.

Knight Foundation is the leading founder of journalism and media innovation. It’s seeking the next generation of innovations that will inform and engage communities. Knight’s mission is to promote informed and engaged communities. The foundation does that by investing in innovations in media and journalism, community engagement and the arts.