Romania heads to the polls on Sunday for a second round of presidential elections seen as key for democracy and state of law in the SE European country. After one of the dirtiest electoral campaign in Romania's 25 year post-communist history, some 18 million people have to choose between current Social Democratic prime minister Victor Ponta, who has run a populist, nationalistic campaign appealing to the poorer segments of the population, and Klaus Iohannis, the ethnic German, popular mayor of Sibiu city, who has little to no experience in national or international politics. 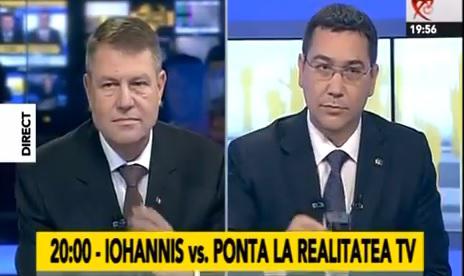 They are vying for the seat currently held by President Traian Basescu, whose 10 year rule divided Romania profoundly.

The past two weeks of electoral campaign were one of the more sinister periods in the country's recent history. And they ended on Friday with demonstrations - not the usual demonstrations of support for one candidate or another, but protests against the government and the bad organisation of voting abroad.

The first round of elections on November 2 was won by Victor Ponta with 40% to Klaus Iohannis to 30%. Several major scandals erupted in the wake of that poll, most important of which are:

Video - Protests against Victor Ponta in Bucharest on Friday, November 14:

Neither of these two issues was responded properly by the government or by local authorities:

These two issues were not the only ones to raise question marks about the fairness of the campaign.

With opinion polls showing a narrower and narrower distance between favorite Victor Ponta and challenger Klaus Iohannis, the governing PSD appeared to dodge any prejudice in securing the victory in the second round.

Victor Ponta's government has decided all sorts of bonus payments for state sector workers over the past months - some of them in the very days before the runoff poll. And on Friday before the poll the National Statistics Institute - the current head of which had been named by Victor Ponta in controversial circumstances a while ago - surprised all economists by announcing a 1.9% economic growth in Q3 compared to Q2 2014 and positively revising previous data that had shown Romania had entered technical recession.

Video - The launch of Ponta's presidential campaign was a massive event rich in nationalist symbols:

Ponta's campaign dug up dormant hostilities between Romania's ethnic and faith groups by calling people to vote for "an orthodox Romanian" - as compared to Iohannis, who is an ethnic German of another faith and who has been called "a stranger". Ponta's people even drew representatives of the influential Orthodox Church into this game, with recordings being published in the media of Orthodox priests urging their followers to vote for a Romanian, orthodox candidate like them.

And Ponta made alliances with far right and populist leaders - forcing Hungarian Democrats, a party that is part of the current government coalition - to declare its neutrality in the second round of elections.

His rival, Klaus Iohannis, who has served as popular mayor of Sibiu, Central Romania for the past 14 years, joined national politics this year when he took over the leadership of the Liberals, following their breakup with their former PSD allies. He has mostly attracted support by standing against Ponta, as he has delivered little proof that he has what it takes to be a president so far.

In the 2009 elections, incumbent Traian Basescu managed to win the presidency despite being the challenger against his PSD opponent at the time, Mircea Geoana. Before the second round of those polls, Basescu was credited with about 45-47% of the votes to Geoana's 53-55% - yet, he managed to win it.

The same balance appears to happen again, with Iohannis claiming 45-47% in opinion polls. But he faced an even more uphill battle, with the most influential TV news channels - holding a strong influence among media consumers - showing extreme bias towards Ponta. While they launched repeated dirty attacks on Iohannis, they broadcast odes to the prime minister and provided him with way more coverage given his being a candidate and the head of government. And two of these stations - politically controlled leading news channel Antena 3 and populist news channel Romania TV - completely ignored the protests that drew thousands of people to the streets across Romania on Friday.

The stakes of this battle are huge for Romania in the current domestic and international framework.