Romania anti-graft prosecutors on Thursday launched a criminal investigation against influential former minister and 2014 presidential candidate Elena Udrea, under charges of money laundering and false wealth statements. The charges are related to her wealth, which prosecutors linked to her former husband, a low-profile businessman who is facing charges in two major National Anti-corruption Department (DNA) investigations. 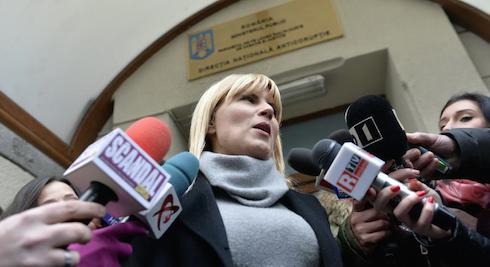 Elena Udrea, a flamboyant, Vuitton-boasting appearance in Romanian politics of the past decade, is best known for her close connections with ex-President Traian Basescu and for her serving as Tourism and Development minister between 2009 and 2012, when she was in charge with huge chunks of public funds as part of Basescu's Democratic Liberal (PDL) administration. In 2014, she had Basescu's support for her candidacy in the presidential elections, but she failed to make the second round of the poll, eventually won by Klaus Iohannis.

Elena Udrea was taken to the DNA headquarters on Thursday morning for several hours of hearings. In the afternoon, the DNA announced officially that she was placed under criminal investigation.

According to prosecutors, her former husband, businessman Dorin Cocos, in 2009 claimed millions of euro from two individuals. The money was to be shared between him, a businessman and a minister of that government, in order to influence the minister and other government officials in a licensing deal with Microsoft. Prosecutors say Dorin Cocos received USD 9 million from one businessman, through a middleman, in that case. The money was passed through various accounts until it reached Dorin Cocos.

Prosecutors point out that minister Elena Udrea's wealth statements for 2010 did not mention loans that a society she was receiving dividends from had obtained from Dorin Cocos. Prosecutors also point out that between 2009 and 2013 Elena Udrea stated the acquisition of several properties the value of which exceeded her income as a minister, deputy and academic activity. Prosecutors understand that she used income from other sources - loans, dividends - to cover the spending, which implies she bears responsibility for the provenance of that income.

Elena Udrea, who is now serving as a member of the Parliament, received a 60-day ban on leaving Bucharest and contacting other people indicted in the case. She must also show up for police checks according to a schedule set by prosecutors.