​The leadership of Romania's governing Social Democrats (PSD) elected their former executive president as new "interim" president of the party, a seat held for the past several years by prime minister Victor Ponta. Ponta stepped down as party president "temporarily" earlier this month because of his being indicted in a corruption case. So the PSD leaders convened to name a replacement and found it in Liviu Dragnea, an influential member who has one big issue: he himself was not only indicted, by received a one-year suspended sentence in a corruption case, a sentence which he has appealed. 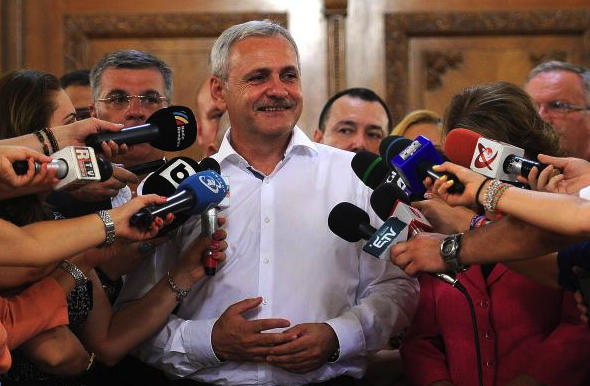 When he withdrew as head of the party, Victor Ponta opted not to resign as prime minister despite huge pressure on him to do so. He said he stepped down as party leader on a temporary basis because he could not ask of others to withdraw from key seats within the party because of their involvement of various penal cases if he himself hadn't done the same.

When Ponta stepped down as president of the PSD, he was replaced for an interim period by top party executive Rovana Plumb. Not on Wednesday the party convened to elect a new head. And Dragnea, who ran for the top party office, defeated Plumb to gain the temporary leadership until a party congress is summoned later this year.

Dragnea served as executive president of the PSD between April 2013-May 2015. He was forced to step down - and to give up his seat as Development minister in Ponta's government, after the High Court gave him a one year suspended sentence for his role in abuses during the 2012 referendum called by the PSD-led governing coalition to dismiss Romania's then-President Traian Basescu.

The High Court decision is not final. The next term in the so-called "Referendum case" is September 28, 2015.

After the sentence, the PSD Executive Committee decided that Dragnea stayed as "political coordinator" of the party, a position that does not exist in the PSD statute.

Between December 2012-December 2014, Dragnea served as Development minister and deputy prime minister in the Ponta government.

Until 2012, he served as head of County Council in the Southern Romanian county of Teleorman. Despite the county being one of the poorest in Romania, Dragnea gained influence as one of the most influential regional leaders of the PSD, the so-called "local barons", and was later accused in the media of being the brains behind major infrastructure businesses contracted by the local administration in Teleorman and other counties.

He came to prominence especially after 2010, once Ponta took over as PSD president. Dragnea was known as a supporter of the "Ponta project" and as very close to the new party leader.