"Coruptia ucide" is the Romanian wording for "corruption kills". The hashtag #coruptiaucide is becoming ubiquitous in Romanian social media as outrage engulfs the public in the wake of the bloodiest event the country has seen in 20 years: the fire that killed 30 and injured at least 180 in a Bucharest nightclub on Friday. As sadness turned to fury, the causes of the Colectiv Club incident are channeling people's anger towards authorities in a country where corruption is leaving people hopeless despite the ongoing, unprecedented fight against it. 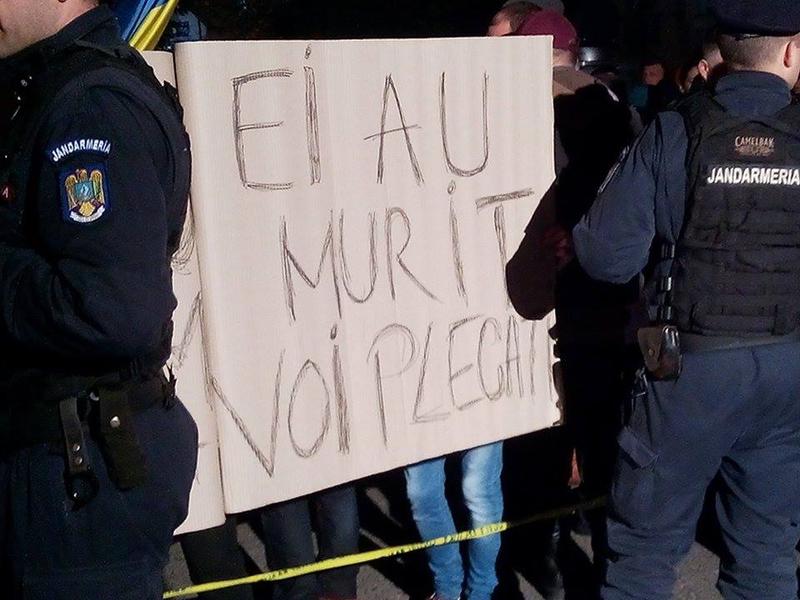 "The day we give in / Is the day we die (...) / Fuck all your wicked corruption" sounded the lyrics of a song Romanian heavy metal band Goodbye to Gravity played in Colectiv Club, a music venue in Bucharest, on Friday night. Moments later, fireworks that were part of the show sent a spark in the soundproofing foam on a pillar within the hall. The pillar and the ceiling caught fire in seconds.

By early Saturday, 27 people were reported dead and some 180 others hospitalised for extreme burns and smoke poisoning. By Monday, the death toll rose to 30 and some 130 people were still in serious condition. On Saturday, when 3 days of national mourning were declared, officials warned the number of the dead could double.

On Sunday, 9 to 12,000 people attended a silent march through Bucharest in memory of the victims of the Colectiv club fire. For the past two decades, rarely has seen the Romanian capital such a movement of people, who were not mobilized by political parties but came on their own to show solidarity.

But their silence hid a growing anger, which was visible on signs some of the marchers were carrying: corruption is killing people in Romania - and in Bucharest, a European capital which for years has seen a major inflow of Westerners drawn to its thriving music and clubbing scene.

Starting Saturday, Romanian media trying to understand the causes of the fire quickly found something to blame. The foam on the club walls was not fireproof. And that there were inaccuracies in the documentation related to the club facilities. Meaning that the club owners obtained official approvals for the venue in an inappropiate manner. Meaning that somebody in the city hall, the fire department or other institutions gave them these approvals - or looked elsewhere - when they should not have to.

President Klaus Iohannis himself said in a statement that irregularities appeared to be at stake in this case.

One word for all these: corruption.

And fingers were pointed towards the mayor of the Bucharest city district where the club was situated, Cristian Popescu "Piedone", who dismissed any wrongdoing on Saturday but later was nowhere to be found. Fingers were also pointed to other local administration officials, to the heads of emergency services and even the Interior minister, Gabriel Oprea. While some media lauded the way ambulances, the police and the firefighters intervened at Colectiv Club, others, quoting witnesses of the fire, reported a "complete chaos" that might have prevented saving dozens of people.

The Colectiv Club case is the latest in a long series of events where corruption and abuse in office is blamed for killing Romanian citizens:

The Colectiv Club case is the most serious disaster Romania has seen since 1995, when dozens of people died in a plane crash near Bucharest.

All these come as a major campaign to fight corruption and abuse in office is taking place in Romania, focusing on large scale cases involving politicians, wealthy business people and other influencers. Among these:

Three days have passed and no resignation was announced in the public administration or the government following the Colectiv Club disaster, which is seen by many a perfect example of deadly corruption - but of the small scale type, incomparable so far to the bling, "multi-million dollar", hard-hitting type currently investigated by the country's National Anti-Corruption Department.

The only resignations so far were those of two department heads within the public service television, TVR. On Friday night, it failed to cover the Colectiv events in breaking news. Earlier this fall, it was decapitated by the Parliament as its former President and CEO accused Oprea of threatening him because TVR reported on his plagiarized PhD theses.

Romania is preparing for an electoral 2016, while Bucharest has to hold elections to elect a new mayor. As political parties, hit hard by the fight against corruption, still struggle to find candidates for city halls and the Parliament, they now face #corruptionkills.