Some 25,000 people marched through Bucharest on Tuesday evening in one of the most intense protests the capital of Romania has seen in years. The march, organized mainly on social media, came in the wake of a fire disaster that killed 32 nightclub goers on Friday night, an accident that many have come to blame on widespread corruption. Throngs of people took to the streets in what became a protest against the whole political class. 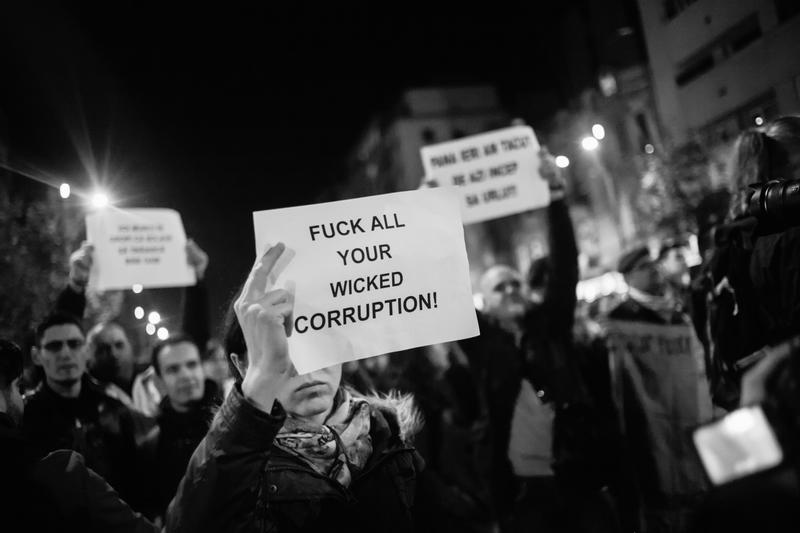 The protest lasted more than six hours, starting at 6.00 P.M. and ending well after midnight. People gathered at University Square, the hotbed of most major protests in Bucharest for the past 25 years. Some 8,000 people left there for the headquarters of the government, and were joined by many, peaking at some 25,000 according to various estimates.

Protesters called for the resignation of PM Victor Ponta, deputy PM/Interior minister Gabriel Oprea and Bucharest District 4 Mayor Cristian Popescu Piedone. But as they moved from Universitatii Square to the Government HQ to the Interior Ministry to the Parliament and even to the Patriarchy of the Romanian Orthodox Church, demonstrators voiced their anger toward the whole political class - and the leadership of the Orthodox Church, which they say failed to offer any relevant support following the devastating fire at the heavy metal gig in Colectiv nightclub on Friday.

Mayor Piedone is blamed for his role of allowing a club to open in insecure conditions. And Interior minister Gabriel Oprea and PM Victor Ponta have become emblems of Romanian political class' corruption and abuse in office: Ponta himself has been indicted under corruption-related charges, while Oprea, who had been accused of plagiarising his PhD and of other abuses, was more recently blamed for the death of a policeman while on duty in Oprea's motorcade.

The Tuesday protest - due to be followed by many others already organised on social media - came as the death toll of the Colectiv club fire rose to 32 earlier in the day, with another injured person pronounced dead in a Bucharest hospital. More than 100 other people, most of them severely injured in the fire, are still in hospital.

Also on Tuesday, the owners of the club were placed under preventive arrest.

And when night fell and protests were bursting in Bucharest, President Klaus Iohannis made a statement saying he was impressed with the demonstrations and that somebody had to take political responsibility before this "feeling of revolt". But protesters were less impressed. Iohannis, who was elected president a year ago in a protest vote aimed at changing the political class in Romania and preventing Victor Ponta from becoming president, made his Tuesday statement as he usually does: on Facebook, away from the crowds.