​Romania's new Justice minister Raluca Pruna has said in an interview published by Romanian newspaper Romania libera that while there is a legal possibility that a person be re-invested as chief prosecutor "the Romanian society is rather antagonistic currently" and a re-investment may lead to criticism. Minister Pruna's allusion to Laura Codruta Kovesi, the head of the National Anti-corruption Department which has led a major crusade against high level graft for years, is quite transparent and may be seen as a first signal that Kovesi's term in office may not be extended. 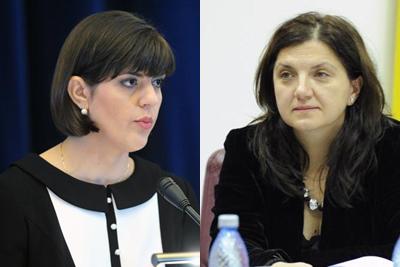 In her interview with Romania libera, minister Pruna said "the Romanian society is rather antagonistic currently and, speaking in principle, I believe a procedure to re-invest a person who has proven good administration skills, integrity and professionalism may expose that persons to criticism from parts of the society".

Minister Pruna also spoke of preparing procedures to select future chief prosecutors. She said she would like a simple such procedure and that she would travel across the country to encourage untainted, good prosecutors to submit their candidacies.

Laura Codruta Kovesi has been named head of the DNA in May 2013. Her three-year term may be extended. She has previously served for two terms as Prosecutor General. Her activity with the DNA has sparked opponents' criticism of the collaboration between the DNA and the Romanian Intelligence Service (SRI). These came along with well-intended criticism from the civil society about certain graft cases which were opened without proper preparation to stand in court.

Under Kovesi, public trust in the DNA soared, with a latest poll run by INSCOP institute showing 61.2% of Romanian trusted the Department, up from 60% in September. DNA is the fourth most trusted institution in Romania after the Firefighters, the Army and the Gendarmerie.

As incumbent US Ambassador to Romania Hans Klemm faced hearings in the US Congress for the new job last summer, the media noted a recommendation made by R. Senator Ron Johnson, who urged Klemm to make sure she would retain the support of the Romanian Government. In 2014, Kovesi had received an award from the US Embassy, as part of the awards handed to the bravest women across the world.

A recent sign of US support to Romania's fight against corruption was made by Ambassador Klem on October 20, when he said he fully supported Kovesi's work.