Social Democratic (PSD) candidate Gabriela Firea would become the first woman to serve as mayor of Romanian capital city Bucharest, according to exit polls for local elections announced on Sunday evening. Romanians voted their local administration across the country today, despite massive apathy, and their ballot offered several surprises. Bucharest fared worst among major cities in terms of voter turnout, with only a third of its voting population showing up at polling stations. And a newly formed party claiming to represent those who lost trust in traditional parties and corrupt politicians faired way better than the the second biggest political party in Bucharest. 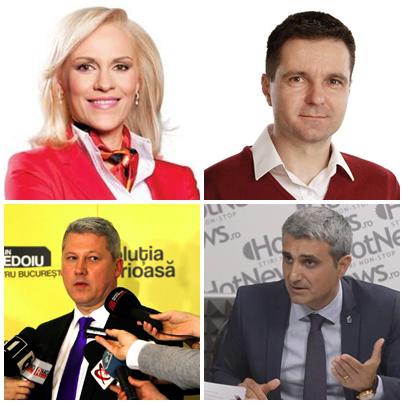 The elections were organized in a single round, so the winners, no matter how many votes they received, are elected mayors. So, unless final results change dramatically, Gabriela Firea would become mayor of Bucharest, thanks to the fact that the opponents of the PSD now split their votes between the next two candidates and, had there been a second round, they would have managed their own candidate to the city hall.

Exit polls run by IRES institute, which did not include voters in the last hour of voting, showed PSD's Gabriela Firea in the lead in Bucharest, with about 42% of the votes, followed by challenger Nicusor Dan (of the newly formed Save Bucharest Union) with up to 30%. The second biggest party, the Liberals (PNL), only got 13% for their candidate, Catalin Predoiu, while other PNL candidates suffered severe losses in other key elections. A fourth relevant candidate, Robert Turcescu, representing the former president Traian Basescu's party, received 6% of the votes, according to polls.

Firea is a former journalist who had worked for politically-connected media and who joined politics as late as 2012, when she ran for Parliament. She has been leading the local branch of the PSD. She received massive support especially during the first part of the votind day, when PSD's voters, usually elderly people, go out to cast their ballot.

According to polls, Nicusor Dan faired way better then expected, especially with the votes received during the last hours of the votind day. Once the results were announced, he announced he would extend his party nationally and would prepare to take part in parliamentary elections later this year.

Dan's candidate for Bucharest District 1 mayor, a French woman called Clotilde Armand, managed to overcome all odds and placed first in district elections, according to polls, but she is very closely followed by the candidate of the PSD.

The PSD won elections in Bucharest's all other districts, according to exit polls. Noticeably, the incumbent mayor of District 3, Robert Negoita, who is facing a criminal inquiry for embezzlement, won some 60% of the votes.

And Nicusor Dan's Save Bucharest Union managed to impose its representatives in most district councils as well as the city council.

Elsewhere across the country, a crushing victory came for incumbent mayor Emil Boc, a former prime minister, in the city of Cluj, where he got more than two thirds of the votes, according to exit polls.

Turnout at national level stood at 48.43%, with the lowest turnout reported for Bucharest - only 33,3%.