Some 25,000 people have been protesting in Bucharest and tens of thousands others in cities across Romania on Sunday evening against the Social Democratic Party (PSD) -led governing coalition and its plans to change the laws of Justice, which would subdue the judiciary politically. 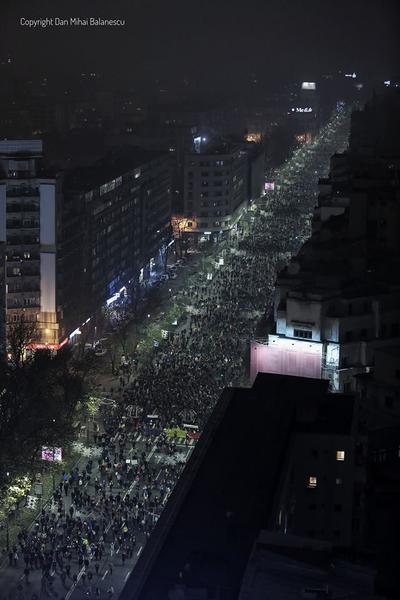 Some 25,000 people attended the protest in Bucharest, which started before the Government HQ, continued with a march and a protest before the Parliament palace. They called for the resignation of top PSD leaders including PSD party president and House of Deputies speaker Liviu Dragnea.

Some 7,000 people also protested in Sibiu, 2,500 in Iasi, many thousands in Cluj and hundreds to thousands in other cities including Ploiesti, Bistrita, Constanta or Alba Iulia.

Various media counted the total number of protesters nationwide at 45,000-50,000.

In Bucharest, the protests were marked by tense moments between mounted police and demonstrators in the early stages, but no major incident occurred.

These are the biggest protests taking place in Romania since previous attempts of the PSD-led coalition to change Justice-related laws, in an effort to stifle the fight against corruption, sparked massive demonstrations counting hundreds of thousands of protesters.

Those attempts, by means of a government ordinance, were dropped at the time, but the governing coalition did not abandon its plans to subdue the judiciary. It refreshed its moves in summer, reaching a peak these days, when a series of legislative bills to are currently discussed in fast procedure in the Parliament.

Lower intensity protests took place during the previous weekends, but for the past several days dozens of civil society organisations and two major trade unions urged people to take to the streets to show their opposition to the PSD attacks against the Justice system and the fight against corruption.

The PSD moves are seen as an effort by party president Liviu Dragnea - who has already received a sencence under corruption-related charges, stands in another trial and faces inquiry in a third corruption case - as well as his cronies who face various charges of corruption to get rid of such troubles by removing the source of their concern - the independence of justice - altogether.