Romanian Parliament votes late into the night over controversial changes to laws of the Judiciary despite opposition protests, street demonstrations and intl pressure

Romanian governing coalition deputies voted on a series of changes to the laws of the judiciary late into the night on Wednesday, despite opposition protests in the House of Deputies, street demonstrations outside of the Parliament HQ and earlier talks on the issue held by key Ambassadors to Romania. The political situation escalated throughout the day, despite a mourning period announced following the death of King Michael, a former, respected ruler of Romania, which was announced a day before. 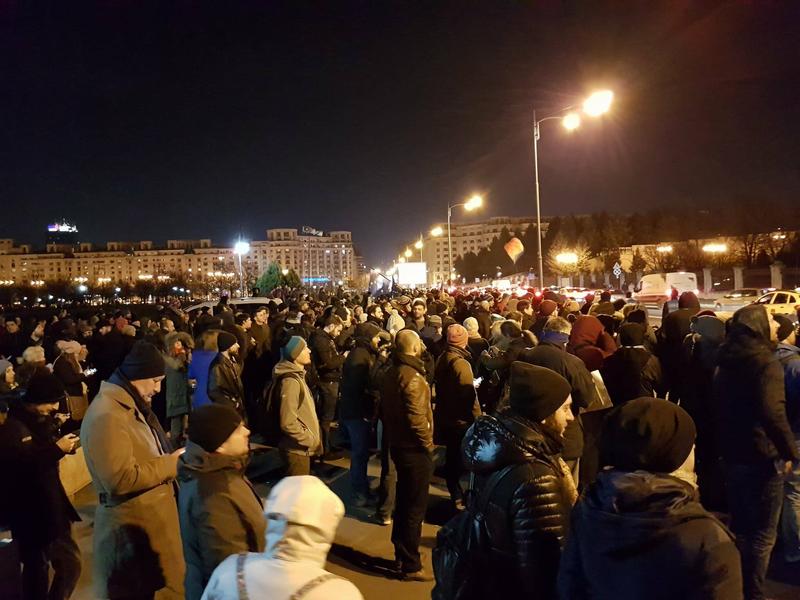 MPs of the governing coalition started voting on a series of changes to the law of the statute of magistrates - a key piece of the legislation covering the Romanian judiciary - earlier today. The changes are part of a larger series of moves of the PSD-ALDE coalition to rewrite the rules of the judiciary, which for months have sparked protests and criticism as they are seen as a massive attempt to subdue the judiciary politically.

The vote, which circumvented democratic procedure by means, among others, of passing amendments without any debate, sparked a protest in the Parliament, where deputies of the opposition Save Romania Union tried to disrupt the process. They used loudspeakers and signs calling governing coalition MPs "thieves" and tried to slow down the process with bureaucratic means.

Still, the voting machine of the political majority went on. And in the evening, some 2,000 people convened before the Parliamentary Palace in downtown Bucharest to protest the events in the Parliament. Several hundred other people also attended protests in cities such as Cluj and Iasi.

Earlier on Wednesday, a group of Ambassadors including the Ambassadors of the US, UK, Germany and France pressed Justice minister Tudorel Toader over the "recent legislative developments" and about "the balance and separation of powers in the state".

The agenda of the talks included "recent legislative developments, the state of fulfillment of the 12 recommendations of Cooperation and Verification Mechanism (an EC tool monitoring progress in the Romanian justice sector - editor's note), the balance and separation of powers in the state."

The PSD-ALDE draft legislation amending Law 303/2004 on the statute of judges and prosecutors entered parliamentary debate on Wednesday. A report from a special parliamentary commission headed by PSD deputy Florin Iordache contained approximately 300 admissible amendments and 400 rejected amendments, many belonging to the initiators, ie PSD and ALDE.