Some 10,000 people faced rain, snow and low temperatures in Bucharest on Sunday evening and many thousands more in Cluj, Iasi and other major cities across Romania for a new round of protests against governing coalition plans to change the laws of Justice in the Parliament. 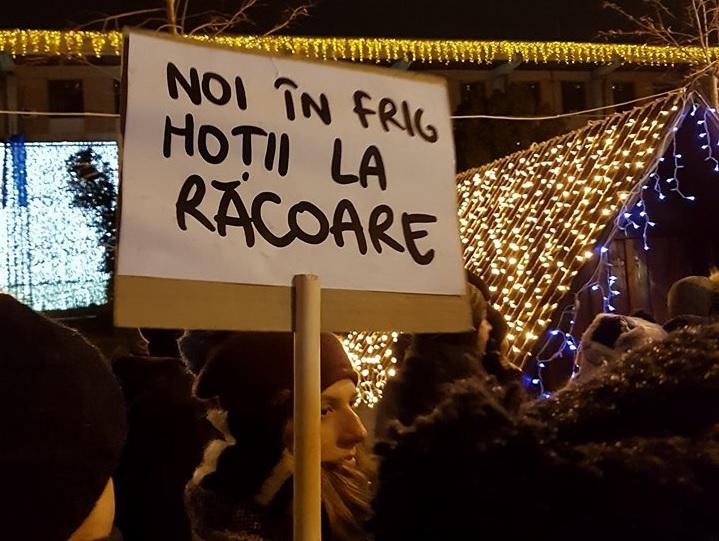 The protests came a day after Romania buried its late King Michael, who ruled the country before communists took over power in mid 20th century and who was seen as an example of dignity and love of his country, They also took place as Romania marks the beginning of the events which led to the 1989 anti-Communist revolution.

The demonstrations were sparked by intense efforts of the governing coalition parties to quickly push through parliament a series of changes to the laws for the functioning of the judiciary. Three major sets of changes have already passed a special commission in the Parliament and expect final passage in the deciding chamber.

But last week new plans came to light: the governing coalition parties, but also the opposition Liberals have submitted a long series of amendments to the Criminal Code and the Criminal Procedure Code. These changes, which are expected to go through the special commission as soon as this week, have been criticised as unprecedented moves to "destroy" not only the National Anti-Corruption Directorate (DNA), but also the criminal legislation as a whole.

Magistrates, the DNA, the Prosecutor General and DIICOT, the prosecutor's office in charge with fighting organised crime all condemned the plans to amend the criminal codes massively and warned that many of their bodies would be left with the impossibility to function.

Protesters in Bucharest on Sunday evening started demonstrations in the Victory Square, then marched to the Palace of the Parliament. But gendarmes prevented them to demonstrate in the proximity of the Palace, claiming that it is an objective guarded by the military and such protests were not allowed there.

Gendarmes had also attempted to block the protesters from leaving the Victory Square, where the Government HQ is situated, but the crowds eventually pushed through their ranks and move on with their march.