​A first for Romanian judiciary: Magistrates in Cluj, Constanta protest changes to laws of justice

Dozens of magistrates in the Romanian cities of Cluj and Constanta convened outside courts on Monday in protest to a series of changes to the laws of justice currently taking place in the Parliament, according to local media. 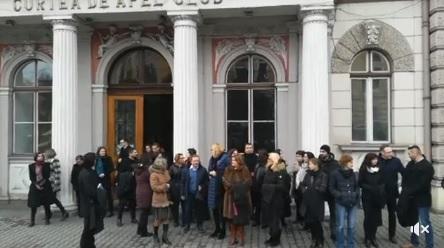 Judges and prosescutors in Cluj convened for a silent protest before the HQ of the Court of Appeals.

Some other 50 judges and prosecutors protested for half an hour before the Constanta Court House.

It is the first time in years when Romanian magistrates opt for protests to show their disagreement with measures adopted by legislators.

The changes to the laws of justice, which have been undergoing a fast moving procedure in the Parliament, have been harshly criticized by many bodies of the judiciary, NGOs and other state institutions as an attempt by the governing PSD-ALDE coalition to subdue the judiciary politically and destroy the laws governing its proper functioning, in the interest of corrupt politicians.