At least nine people died in a crash near Budapest, Hungary on Tuesday, as the Romania-registered small bus they were travelling with collided with a truck, according to the Romanian Foreign Minisry. 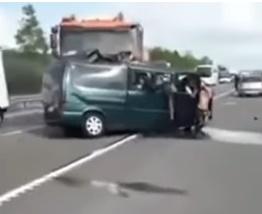 At least four of the victims have been confirmed to be Romanian citizens. There is a strong possibility that the other five victims are Romanian as well.

According to multiple sources of information, it appears that the driver was live on Facebook when the crash occurred. Images published by Romanian website Dejeanul.ro, which could not be confirmed to be real, show what appears to be the moment when the two vehicles collided.