The European Commission on Tuesday issued a blasting report the evolution of Justice reform in Romania - the so-called Cooperation and Verification Mechanism (CVM) - while the European Parliament adopted a resolution on the state of law in the country, seriously critical of events in the past year. Meanwhile, in Bucharest, the leader of the governing PSD party tried today to dillute the importance of the EU bodies' interventions. 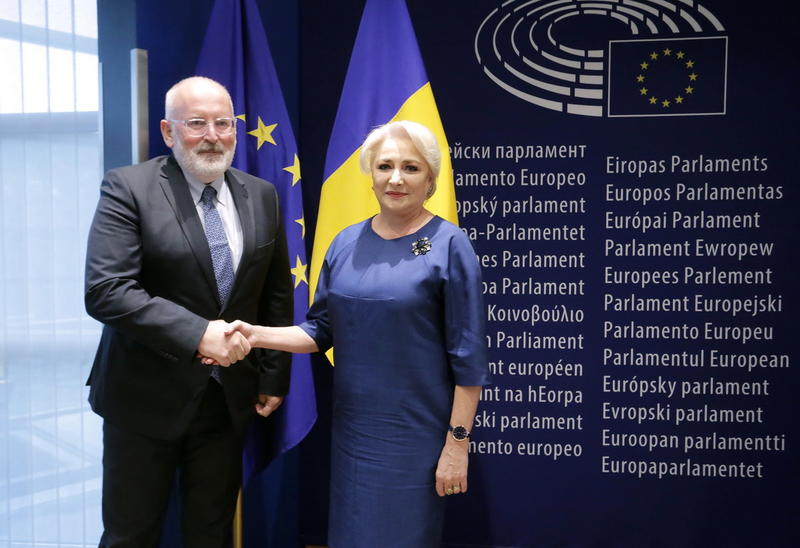 The European Commission proposed eight supplementary recommendations for Romania in its CVM report, urging authorities in Bucharest to suspend the application of recently adopted Justice-related laws and review them in line with specialised bodies including the Venice Commission and GRECO.

It also demanded a freeze in the application of changes brought to the Criminal and Criminal Procedure coes, as well as in the procedure to name and revoke top prosecutors.

EC vice-president Frans Timmermans said it was regrettable that Romania not only stopped reforms but made steps back from what it has managed to obtain over the past decade.

The CVM report came just hours after the European Parliament adopted a resolution on the state of law in Romania, condemning the violent and disproportionate intervention of riot police against protesters during August 2018 demonstrations in Bucharest. It also recommended national authorities to oppose measures that would decriminalize corruption among state officials and to apply the national anti-corruption strategy. The resolution was supported by a vast majority of European Socialists, the political family of Romania's governing PSD party.

Also on Tuesday, Manfred Weber, the leader of the EPP, the largest political group in the European Parliament and official candidate for the top EC job, said on Romania that it was unfathomable how the government of a country due to hold the EU Council presidency was raising question marks about the stat of law.

Meanwhile in Bucharest, prior to the publication of the EC and EP interventions, PM Viorica Dancila and the head of the governing party, House speaker Liviu Dragnea, attempted to dillute the importance of the EU positions, saying in a press conference that Romanians should focus instead on what is of "real" interest for them - the application of the governance program.

And other officials of the PSD and their ALDE allies, both at home and among Romanian MEPs, also tried to dismiss the CVM report, with urges to "reject" them or ignore them as "futile" positions.

But President Iohannis made a new stand against the governing party, again calling it "an accident of democracy" where leaders are fight against Romanians, not for Romanians. He said the behaviour of the government was "worrisome" and the EU positions today should "make us think hard". The only objective of the Dragnea-Dancila government was to help Dragnea dodge criminal sentences and prison, he said.

The two EU documents tell Romania it has returned to where it was 11 years ago, prior to its accession, the president said. The Dragnea-Dancila government erased the whole progress made since then, he said.