Throngs of Romanians attended the blessing of a gigantic new Orthodox cathedral on Sunday, in the immediate vicinity of the immense Communist-era House of the People. The event and its circumstances painted a vivid tableau of the country which is due to celebrate the anniversary of 100 years of statehood on December 1. 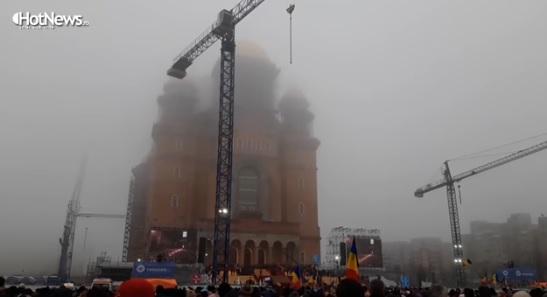 Tens of thousands of people from all walks of life gathered outside the perimeter of the new Orthodox Cathedral starting early in the day, showing the level of support the Church and its huge projects have among the population.

Some 90 people needed medical care after scuffles in the crowd during the ceremonies.

The building is named the Cathedral of the Salvation of the People. It was blessed in a massive televised ceremony despite construction works not having concluded and despite the lack of proper approval from fire protection authorities.

The fire protection approval is especially relevant in Romania, where dozens of youth died in a club fire three years ago, a tragedy blamed on widespread corruption.

Church people have been warned they bore the responsibility in case of any fire-related incident.

Still, the ceremony went on, headed by Romanian Orthodox Patriarch Daniel and attended by international clerics such as Patriarch Bartholomew I from Istanbul. Crowds could admire the limousines of the top Orthodox officials performing the blessing ceremony.

In a country where highway construction works and other infrastructure projects face huge delays, where health and education projects are most often left on the sidelines, the building of the Cathedral was largely completed in time.

And its cost amounted to at least EUR 110 million, with most of the money coming from the government and local (especially Bucharest) authorities.

The Cathedral claims 11 hectares of land in the immediate vicinity of the House of the People, Communist-era dictator Nicolae Ceausescu's most notorious architectural endeavour.

Works started in 2010 and the blessing of the Cathedral - not yet properly finished - took place a week before the December 1 ceremonies due to mark the 100th anniversary of today's Romania.