Romania's PM Viorica Dancila on Monday announced that the leadership of the governing Social Democratic Party (PSD) has decided the adoption of an emergency ordinance on the penal code and penal procedure codes of the country. She said that there was a vote on the opportunity of such an ordinance, but not when it would be adopted. 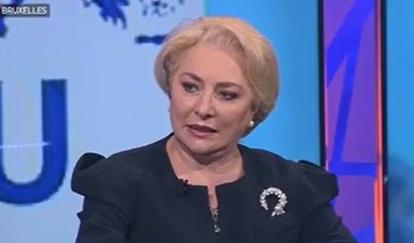 The PSD thus tries to adopt a series of changes to the law at the end of a year-long battle to push through changes to the penal code and and the criminal procedure code. The changes, some of which were declared as unconstitutional and which sparked a wave of protests both domestically and at EU level, have been facing delays.

Also, fears have been amounting lately that the government might try to push through changes to the amnesty and pardon legislation, which are seen as attempts to help high level politicians facing sentences related to graft or other criminal charges.

PM Dancila said articles which have been declared unconstitutional would return to Parliament to be changed so that they fall in line with the Constitution.

PSD leader Liviu Dragnea, who serves as House speaker and who, facing graft-related charges, is seen as a key beneficiary of legal changes attempted by the coalition, said on Monday that the party decided an emergency ordinance was needed because "the legislative process is prolonged too much" and has become "a history that never ends".

And Justice minister Tudorel Toader said his ministry would analyse to what extent one or two ordinances may be adopted to apply legislative changes seen as constitutional. He would not say what was the emergency that requested such ordinances.