Some EUR 3.1 billion were erased on the Bucharest Stock Exchange (BVB) on Wednesday, a day after the Romanian government announced a draft ordinance bringing major changes to taxation and other corporate regulations, less than two weeks before the new year. Energy and banking institutions were most affected by the BVB blow in the wake of the government announcement, which mainly affects banking, energy, telecom and insurance companies. 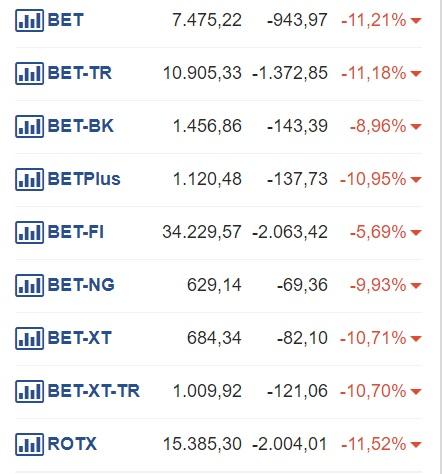 The BVB lists many companies where the Romanian state still holds key stakes.

The capitalisation of companies on the main market fell by over RON 14.8 billion to 145.8 billion in one day. It is the hardest one-day fall since January 7, 2009, when the BVB closed with a loss of 12.29% for its key index as the international financial crisis unraveled at the time.

The biggest losses were reported by companies:

A representative for the BVB, Florin Cepraga, wrote on Facebook as the market closed that the wole growth reported by the Romanian exchange in a whole year was annihilated in one day.