UPDATE VIDEO Trump-Iohannis Meeting ​US President says relations with Romania better than ever, notes results of fight against corruption / Romanian head of state called for increased US military presence in the country

US President Donald Trump noted on Tuesday the results of the fight against corruption in Romania, saying counterpart Klaus Iohannis was doing a very good job in this regard. He made the comments in replying to a question by the HotNews.ro correspondent as Iohannis was welcomed at the White House today. 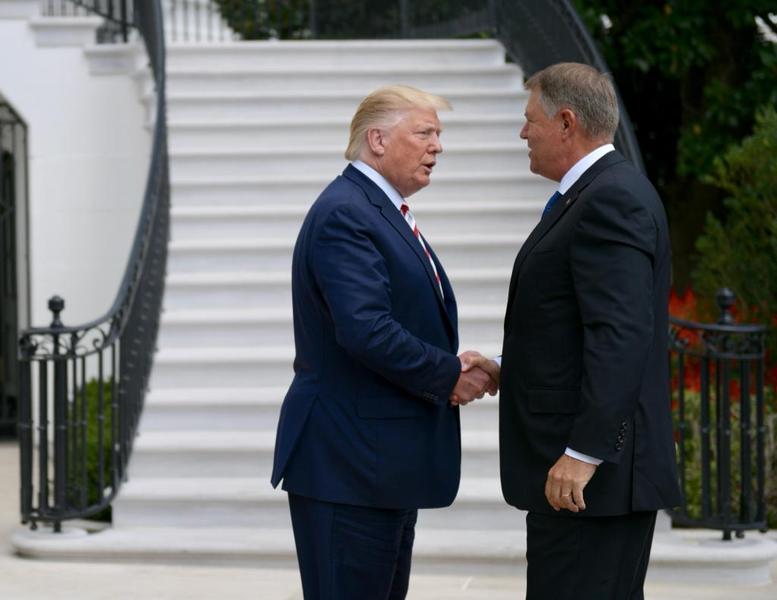 President Trump said on the margins of the meeting that relations with Romania were better than ever.

He said he'd like to visit Romania and noted the good results of the fight against corruption in the country.

Asked if he considered America's partner states such as Romania should better analyse the businesses of Chinese companies (such as Huawei) when making decisions on critical infrastructure, he said he was convinced Romania would do this.

Face to face talks due to last about half an hour concluded after about an hour.

On the occasion of the visit, President Trump issued a statement celebrating the partnership with Romania and noting "the future of Romania and Romania's relationship with the United States is very, very bright".

President Iohannis said in press statements following the meeting with Trump that the talks were "excellent". Key statements made by Iohannis:

Following the talks, the two presidents issued a joint statement re-affirming the "robust and durable strategic partnership" of the two countries and clarifying their common stand on a series of issues, including the opposition to the Nord Stream 2 "and other projects that make our Allies and partners dependent on energy from Russia".

The joint statement in full:

As the Presidents of the United States and Romania, we stand together as friends and Allies to advance our robust and durable strategic partnership. Through our deepening partnership, we will create new opportunities for greater security, growth, and prosperity and be in better position to respond to shared global challenges and responsibilities.

We recall the Revolution of 30 years ago this December when brave Romanians overthrew a brutal dictatorship and set their country on the path to democracy, the rule of law, and a market economy. This year, we also mark with pride the 15th anniversary of Romania’s accession to North Atlantic Treaty Organization (NATO).

Together, our nations have carried out lasting efforts to modernize our armed forces and meet our NATO burden-sharing commitments. Our militaries stand shoulder to shoulder in defense of freedom and look to bolster our defense and deterrence posture on NATO’s Eastern Flank, including in the Black Sea, which is of strategic importance for transatlantic security. We also seek to avoid the security risks that accompany Chinese investment in 5G telecommunications networks.

The United States and Romania recognize that energy security is national security. We underscore our opposition to Nord Stream 2 and other projects that make our Allies and partners dependent on energy from Russia. Natural gas resources in Romania have the potential to increase the prosperity of our nations and to enhance Europe’s energy security. The United States and Romania will consider how best to improve the energy investment climate in Romania in ways that benefit both countries. We further urge our industries to work closely together to support Romania’s civil nuclear energy goals.

Our excellent law enforcement and anti-corruption partnership is firmly based on a mutual commitment to the rule of law and an independent judiciary, which are strongly supported by the Romanian people. We further stress that good governance forms the basis of our shared security and prosperity.

The United States and Romania proudly underscore the substantial trade growth between our two countries, as well as our common interest in shaping an investment climate that offers transparency, predictability, and stability. We therefore commit to strengthening our trade relationship further and to encouraging increased two-way investment.

The United States reiterates its support for Romania’s efforts to become eligible for entry into the Visa Waiver Program in accordance with the requirements of United States law.