The secret past of Romanian businessman Sorin Ovidiu Vantu. The story of Securitate informer "Nus"

Romanian businessman Sorin Ovidiu Vantu, best known now for his ownership of a media group including Realitatea TV news channel, signed up as an informer for the Ceausescu-era secret police Securitate in 1983, his file - under the conspirative name of Nus - appearing closed in 1988, as it results from a series of documents of what appears to be his personal file. A former Securitate officer confirms Vantu had been recruited while in prison where he was serving time for embezzlement and included after his release in the network of an officer in Roman, the city where SOV lived before 1989. 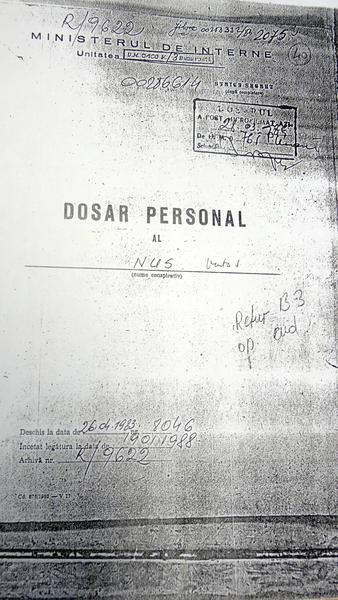 Contacted twice, at the beginning and the end of the investigation, Sorin Ovidiu Vantu said he retained his right to have a reaction after the report is published.

A series of documents from his Securitate personal file shows that Sorin Ovidiu Vantu was recruited by the Securitate at the age of 28, in April 1983, while serving a five-year sentence for embezzlement at the Bacau penitentiary. The IVth Counter-information Direction opened Personal File no.8046. The Direction was among others in charge with recruiting informers from among detainees.

In an undated document written by Vantu, he said he would provide information as written notes signed with the name of "Nus" instead of his real name.

The file shows, among others (detailed information on the Romanian-language version of HotNews.ro):

HotNews.ro and Kamikaze followed several leads to check the authenticity of the documents. The only document written by hand is the one by which he commits to working as a collaborator. Journalists found documents written and signed by Sorin Ovidiu Vantu after 1990 and submitted them for expert comparison with those in the file. The expert found the documents are written by the same hand "in a 90% proportion".

But the file does not include informative notes written by SOV as noted in the personal file. According to experts, the notes are kept in so called annex files which accompany the personal file. These annex files were not micro-filmed. Specialists say the notes written by informer Nus may come out in the files of those he informed about. In their absence, it's unclear whom informer Nus informed about or whether these reports qualify hem as a collaborator of the Securitate, according to existing legislation. This would only be established by the CNSAS, the main body studying the files of Securitate archives and, if its decision is challenged, by court.

HotNews.ro / Kamikaze also discussed with various people in Roman and elsewhere who knew Vantu at the time and reports on their points of view on the Romanian-language of HotNews.ro.

Sorin Ovidiu Vantu's links with former Securitate officers started before 1989 but continued many years after the revolution. A June 2000 Radio Free Europe analysis shows that in 1997 the head of the Romanian Intelligence Service (SRI) of the time, Costin Georgescu, said in the Parliament that GELSOR group, with which Vantu's name was associated, included 27 firms, was working 90% with officers of the former Securitate or of the SRI, and was built on a limited responsibility firm run by Colonel Rudareanu.

GELSOR was associated with the National Investment Fund (FNI), one of the biggest pyramid schemes of the '90s. The business collapsed in 1999 and left over 300,000 people without their invested money. Many FNI branches across the country were run by officers of the Securitate or the SRI.