Romanian democracy and state of law are facing a new challenge 25 years after the fall of communism as the country heads to the polls to elect a new president on Sunday. Social Democratic prime minister Victor Ponta, the ethnic German mayor of the city of Sibiu Klaus Iohannis spearheading the opposition and 12 other candidates are vying for the seat which incumbent President Traian Basescu has held for ten struggling years. The first round of elections today ends a campaign like no other in Romania's recent past, with no real political debate but marred by a sweeping wave of corruption-related arrests, suspicions of intelligence services interfering with the political process, and a heavy use of biased media to smear rivals and shove sensitive issues under the carpet. 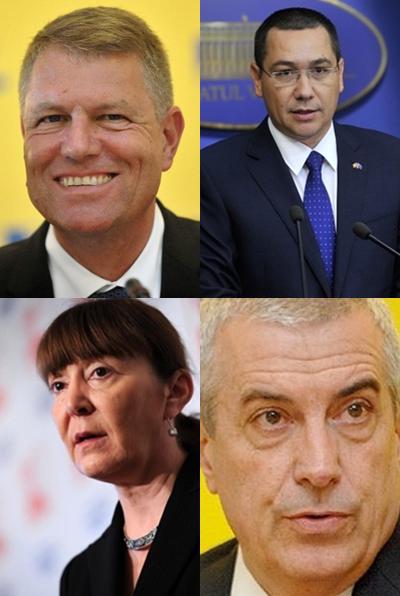 Throughout the month-long campaign, opinion polls have put PM and Social Democratic Party (PSD) head Victor Ponta, 42, in the lead. He is followed by Sibiu mayor Klaus Iohannis, who runs as the candidate of a new alliance of opposition Democrats and Liberals. Both Ponta and Iohannis are credited with double digit percentages in voters' preference.

They are followed at a far distance by a group of other candidates including Elena Udrea, a former minister and close collaborator of Traian Basescu; Liberal maverick Calin Popescu Tariceanu, who served as prime minister during Basescu's first term; Monica Macovei, a former Justice minister and more recently member of the European Parliament, best known for her political fight against corruption; and Theodor Melescanu, a former Social Democrat turned Liberal politician who for the past two years has served as head of Romania's Foreign Intelligence Service.

Who are the top candidates?

The poll comes 10 years since Traian Basescu took over the Romanian Presidency on the back of a wave of distrust in the Social Democrats, generally seen as the heirs of the communist-era regime, who had led Romania in the early 2000's. Basescu focused his presidency on efforts to strengthen the EU/NATO orientation of Romania, the rule of law and the fight against corruption. He survived two referendums aimed at removing him from power and managed to hold ground against relentless attacks by his opponents, many of whom have been arrested and even convicted under charges of corruption in more recent years.

But as his party, the Democratic Liberals (PDL), lost public support after years in the government, in 2012 Basescu accepted to share power with the Social Democrats and named PSD leader Victor Ponta as prime minister, agreeing with him on key nominations for the leadership of top judiciary and anti-corruption bodies. The very same year, he faced a second referendum in which Ponta's party and its allies tried to remove him from office. He survived it, but since then he has struggled to retain his political footing. In these elections, out of several people attempting to represent the opposition against Ponta, he opted to lend his support to long-time crony Elena Udrea, despite her walking in circles of power that transcend governments of all colors, being surrounded by influential business people who are now facing prosecution on corruption charges and herself being the target of media accusations of corrupt practices.