Gunther Oettinger, on the failure of Nabucco West: The decision was based on commercial deliberations, to put it bluntly: money talks / The European Commission remains neutral in this kind of situations and treats all investors the same

European Commissioner for Energy Gunther Oettinger said in an interview for HotNews.ro that the failure of Nabucco West in the competition for the Azeri natural gas was "a commercial decision" of the Azerbaijani consortium. "To put it bluntly: money talks", declared Oettinger, explaining why Azerbaidjan was more attracted by the winning bid of the TAP project. Asked if the decision of the Azerbaijani consortium was a victory of Russia against the EU, the commissioner said "I would certainly not put it that way" and explained that the European Commission remains neutral regarding the competition which could reduce the dependence of Southeastern Europe on gas imports from Russia. 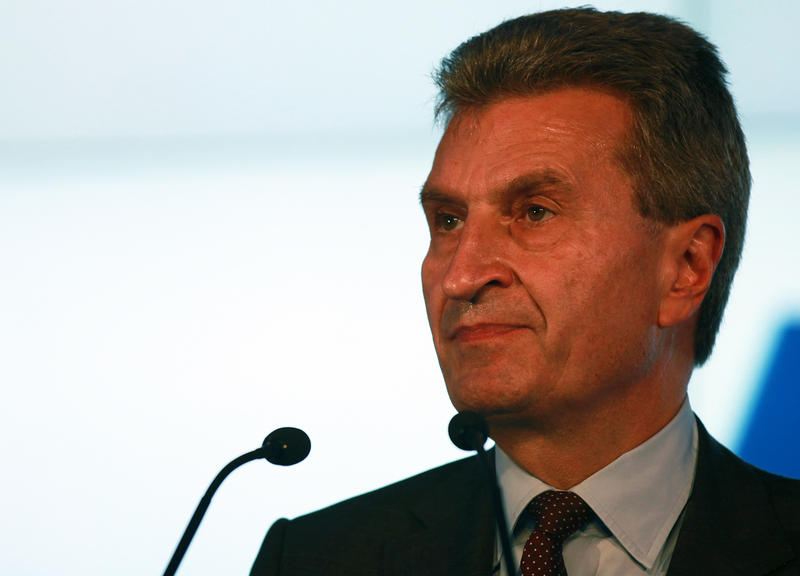 Reporter: How would you explain the failure of Nabucco West? Was the commercial offer of Nabucco much worse than that of TAP or are there political reasons involved?

Gunther Oettinger: The decision of the Shah Deniz Consortium – the companies operating the Shah Deniz 2 gas condensate field – to provide gas to TAP rather than to Nabucco West was a commercial decision. decision was preceded by a selection procedure based on transparent criteria.

Reporter: Do you think that Gazprom's decision to withdraw its bid for DESFA in favor of SOCAR was the result of negotiation between Azerbaijan and Russia, as suggested by the Greek officials quoted by Reuters?

Gunther Oettinger: I have no reason to believe this is true. After all, Gazprom did not bid for DESFA in the first place.

Reporter: Die Presse has indicated that the opposition of BP to Nabucco West was the main reason for the election of TAP. Why would BP prefer TAP instead of Nabucco West?

Gunther Oettinger: This question should rather be addressed to BP. Again, in my view the decision is based on commercial deliberations, to put it bluntly: money talks. In fact, Italy is a large, rich market with little real competition at the end of a shorter pipeline, compared to many fragmented small markets along the route of Nabucco West, a longer more costly pipeline. In addition, in Austria, there is a hub, developed in the past few years, that consistently drives down prices.

Reporter: How would you explain the neutral stance of the European Union in this competition, given that, in real terms, there was a competition between a company registered in the EU (Nabucco West) and one outside the EU?

Gunther Oettinger: The European Commission remains neutral in this kind of situations and treats all investors the same. It is not our role to take sides between different investors but rather to ensure new sources of gas for European supply. This is what has been achieved.

Reporter: What caused the European Commission to change its position in recent months, a time frame that was conclusive for the outcome of the competition, after the Commission had strongly backed the Nabucco project?

Gunther Oettinger: The European Commission's main task in these discussions was to guarantee the security of supply for our citizens and businesses. For this it is important to diversify our suppliers as well as the routes. The initial Nabucco project would have linked the gas reservoirs from the Caspian area to the EU. This would have given us access to new gas sources through a new route. Finally, Azerbaijan chose to build TANAP to link the Caspian sea gas reservoirs to the EU border. This met our concerns on security of supply – thus, there was no reason anymore to support any particular route, Nabucco West or TAP as both pipelines distributed gas within the EU.

Reporter: Is the exclusion of Nabucco West and the selection of TAP Rusia's victory in the face of EU?

Gunther Oettinger: I would certainly not put it that way. Russia was and will remain our important gas importer and partner. After all, this is not a zero-sum game. It is clear that Europe wins by getting more gas from a new source. And Europe would also benefit, if Russia or Gazprom built a new pipeline to or within the EU.

Reporter: Elshad Nasirov, Vice-President of SOCAR, said this February that "if the EU has not found the means to implement this project, we would not argue with the opinion of the EU about how the interests of European countries are protected. We will not argue with the EU, but we can confirm the fact of inability of the EU and member countries to find ways to build a pipeline". How is the UE going to cope with this image of a political union that is unable to defend its members' projects?

Gunther Oettinger: I have great respect for Elshad, but I'm afraid this time I cannot agree with him. In principle, in the EU, companies build and operate projects and governments govern. Again, our key interest was to get additional gas supplies to Europe – and this we will get.

Reporter: Do you think that there are internal factors in each of the countries involved in Nabucco that led to this failure? What would these be?

Gunther Oettinger: I believe the companies have taken all commercial criteria fully into account when taking this decision. It is clear that gas producers do not like competition as it erodes their prices. What happened between 2006, when Nabucco got going, and now is that Europe's gas market became much more competitive. I have mentioned the commercial arguments which have probably guided the Shah Deniz Consortium to opt for TAP and not for Nabucco West. I cannot see what the countries involved in Nabucco could have done differently to influence this commercial decision.

Reporter: There is noticeable frustration in the states involved in Nabucco West towards the decision of the Shah Deniz consortium. What does the European Commission intend to do in order to reduce the dependence that the Southeastern European countries have on the Russian gas and to diversify gas supplies?

Gunther Oettinger: We can do a great number of simple and small things that cumulatively will have a greater effect than a mega-interconnection project. We have already built interconnectors between Romania and Bulgaria and Hungary; Hungary and Croatia are now connected. We are financing the connection of Bulgaria and Serbia, and we hope to end the isolation of Bosnia and Herzegovina.

There are existing pipelines taking gas from Russia to Greece and Turkey; we can reverse the contractual flow in these pipelines. But what we need to do is work together, at the same time, on the small things.

Reporter: What is, in your assessment, the impact that the failure of Nabucco West will have on Romania? How about the impact on Bulgaria and Hungary?

Gunther Oettinger: More important than the "failure of Nabucco West" is the opening of the Southern Corridor. With an effective and functioning internal energy market, with the necessary infrastructure and reverse flows in place, once the gas enters the EU, it can be transported anywhere in Europe, including to Romania, Bulgaria and Hungary. Interconnections, championed by the European Commission, will secure the ability of gas to reach Member States who have just one or only few suppliers, such as Romania, Bulgaria and Hungary.

The Commission is also working with Serbia and Bulgaria to build a connection between these two, and Romania is now connected to Hungary and Bulgaria. The North-South initiative, spearheaded by the Commission, has put in place many small interconnectors that create a web of interconnection in South East and Central Europe.

Reporter: There is an ongoing controversy in Romania regarding the exploration and exploitation of shale gas. After the failure of Nabucco, which means the removal of an alternative to gas imports from Russia, do you think that shale gas may become an alternative?

Gunther Oettinger: For enhancing the security of supply and competitiveness of the European economy we should look at all possibilities to develop indigenous sources of energy, including shale gas.

SuperLiga: FC U Craiova vs U Cluj - Scapă cine poate