Gas market stakeholders have been watching the spectacular evolution of a limited company with only two employees which has become one of the biggest gas importers in Romania. In April this year, it even became the biggest importer, temporarily, with over 50% of total imports. Voices on the market claim the strings behind the company may lead to Moscow. 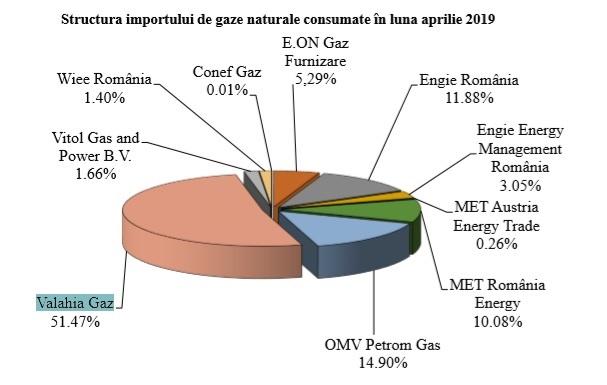 Regulators in both Romania and Hungary are said to run a joint investigation on the activities of the company, according so sources within Romanian energy market regulator ANRE.

Sources on the market have linked it to politicians from ALDE party, a political group who was part of the governing coalition until it split its partnership with the governing Social Democrats last month. The company was also linked to managers in the gas market. This comes as all energy ministers for the past two years have been ALDE people.

The company is named Valahia Gaz SRL and, according to Termene.ro data, was established in September 22, 2017. Within a year, it reached a revenue of RON341.8 million and a loss of RON44.2 million. The company reports only two employees.

In recent months, it came to prominence with large gas imports through the interconnection point with Hungary. According to ANRE data, in April 2019 the company claimed 51.47% of imports, followed way behind by OMV Petrom Gas with 14.9%. In May, it claimed 41.2%, behind OMV Petrom (50.7%).

National Statistics Institute data show Romania had unnaturally high imports in the past several months, with a 56.7% y-o-y increase in January-July 2019.

The company does not appear to give much consideration to budget contributions as on December 31, 2018 it reported a debt of RON 11.1 million to the state budget, which increased to 52.8 million by March 31, 2019.

Its manager is Romanian citizen Spiridon Damian, with a participation of 54.6%. The other associate with 45.38% is Msuknisvhili Dimitry, a Georgian citizen from Tbilisi.

Valahia Gaz was also the subject of a media report by Profit.ro business news website earlier this year. It reported that the company was established by a person about little is known, Constantin Muceanu, who was joined in late 2017 by a Georgian citizen, Archil Msuknishvili, who became sole shareholder shortly. A series of changes led to the current ownership.

Profit.ro quoted an investigative report according to which Damian Spiridon had been revealed as a collaborator of the Ceausescu-era secret police, the Securitate. The same source quotes a different media report by newspaper Evenimentul Zilei according to which, before Spiridon, the company Total Corporate Investment Group had been held by a Swiss vehicle, Total Asset Management, with hidden shareholders. This was believed to be linked to the businesses of several millionaires from ex-Soviet countries and with connections fo former USSR intelligence officers. On of these is claimed to have been Boris Golovin, a Moldova-born Romanian citizen involved at one time in a failed project to build a thermal energy plant in Galati, as well as other projects.