Will people adopt emerging technologies with the same openness in the future? - interview with Rareș, Software Engineer at Keysight Technologies Romania

The history of mobile phones began in 1876 when Alexander Graham Bell first patented such a device. However, it took almost another 100 years, until 1983, when the mobile phone was closer to what we have today, to see a significant increase in adoption. 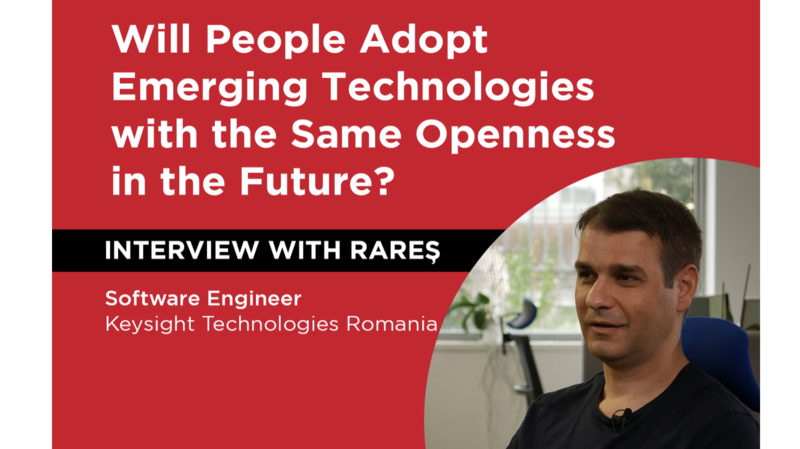 Even so, since the price was quite steep ($4000, equivalent to about $10,000 today), it weighed almost 1kg, was about 30cm long, and required 10 hours of charging for 30 minutes of operability, most viewed this new invention as a device for the rich and not the masses. It wasn’t until 24 years later, in 2007, when the first smartphone was released at a more affordable price for the majority of the population, that we started to see accelerated adoption.

A similar situation occurred at the end of the 19th century when the first tractor was invented, and farmers were skeptical about replacing the horse plow with this new invention. Their hesitation wasn’t entirely unfounded - back then, tractors offered few advantages over horses, one of the biggest disadvantages being that they couldn’t reproduce themselves.

Starting from these two examples, we can say that each generation presented adversity to emerging technologies so that later these technologies would become indispensable, and some specialists claim that this trend will always be preserved in the future.

But an important thing to note is that the chances of these technologies being used against those using them were considerably lower than with current technologies such as wearables or IoT, which can expose users to security breaches with serious consequences. Because of this, other specialists argue that it is possible that in the near future, users will develop hostility against certain emerging technologies that bring with them more disadvantages than advantages.

To find out more about the status quo of technology and how new technologies and products appear on the market, we spoke with Rareș, Senior Software Engineer Keysight Technologies Romania.

1. What made you come to Keysight? (projects, technologies, work environment, something else?)

In the past, I often participated in competitions for startups, and at one of these competitions, I met Teodor Ceaușu, Country Manager of Keysight Technologies Romania, who was my mentor and who told me that he would love me to join the team. As I had feedback about the work environment from former colleagues who were already working in the company, and the field and projects were in my area of interest, I accepted the invitation, and here we are today.

What I like about Keysight is that it’s a big company, and in networking and security, you can join or even start new, adjacent projects in the team you want.

2. How does the development of a new product unfold at Keysight, from the identification of a new trend or a need in the market to the final product?

A Keysight product typically follows an organic path. It grows from certain internal or external project needs and client requirements, and when it becomes mature enough, it is presented to them. We constantly ask for and seek feedback so that a product truly brings value to the user. As a unique fact, we have several commercial products launched as hackathon ideas resulting from the internal competitions between teams that we organize annually.

3. What do you think are the technologies we should focus on now?

The important technologies today, especially from a consumer perspective, are those that connect / interconnect certain things and those that concern users’ security.

Constantly, in any field, sometimes at intervals of several months, there are new discoveries or dramatic improvements for just about everything. One such example would be pressure sensors that can detect such small variations that you can programmatically know when a person leaves the room or opens/closes a window. But all these increasingly advanced capabilities come with the need to capitalize on them, and immediately the question arises - “How do we connect it further into a system that helps us do X or Y?”

The world has become accustomed to producing modular, interchangeable things, and the direction of development is that there will be practically no led lamp, humidifier, or glucometer that does not have its own mobile application. In addition to these, as soon as smart devices with increasingly advanced capabilities (the technical level of the commercial products, if not even the quality, now exceeds what only governments had 20-30 years ago) are used in smart systems, there is a need for security, for their use only for the desired purposes and only by certain people.

Not to mention that the collected information is constantly hunted by third parties for any kind of benefit - credentials can be used for fraudulent logins or theft, biometrics can be used for market research, attackers can gain control directly of the devices for DDoS attacks, etc.).

4. From your point of view, what will be the technologies that will gain momentum in the coming years, and what should we expect?

The technologies that center around the life of the consumer will be the ones that will develop rapidly due to massive investments, from mobility and health to the complete change of certain paradigms in our lives. For example, the need to be connected via a mobile device - laptop, tablet - anywhere, including outside the cities, is no longer about entertainment but about work. Similarly, health monitoring has already moved from the medical system to everyone’s home through various devices - thermometers, blood pressure monitors, glucometers, etc. The robot vacuum does daily maintenance cleaning for us, and the automatic lawnmower saves time for any lawn owner.

The pandemic has short-circuited many fields for the better, and the digital one is among the most profitable. First of all, all the operating infrastructure of online shopping, exclusive card payment, interactive online meetings, and courier logistics all already existed, but thanks to the pandemic, they have developed and been adopted at an unprecedented pace. Not to mention that for some jobs, where it’s not necessary to stay at the office, companies have preferred to work remotely and people to adapt to the situation.

6. Have you noticed an increase in interest in wearables?

Yes, the interest has increased a lot, especially since the pandemic has forced many people to ask themselves the question, “Am I healthy or not? How healthy?” At least at the beginning of the medical crisis, there were many unknowns, and you had to have a high-performance thermometer to be able to detect the early febrile state (37+°C) or a smartwatch with a sensor and software as advanced as possible to detect the accelerated pulse or low blood oxygen saturation - all of which meant money and investment from both sides in the wearables industry.

7. How accurate are wearables at capturing information? How long until we see the technology from the labs in a watch or a ring?

For the most part, we are already there - we have discussions among colleagues that everyone has their own technology in miniaturization, information processing, display, sensing, etc., which 30-40 years ago were the dream of any research center.

Commercially speaking, it’s an ongoing race to miniaturize, lower costs, and make pretty much anything possible, including items as small as a ring, that fashion actually drives the pace of production or purchase, not necessarily a necessity. It is even possible to witness a wave of opposition to this trend, similar to the one in Dune, where people refuse to let technology play such an important role in their lives as it does now.

8. What are the risks associated with this type of device?

The risks are pretty high for just about anything that isn’t fully understood or used for the purpose it was created for. People tend to become familiar with and quite dependent on mass-produced, affordable, and trendy devices without questioning where utility ends and malicious exploitation can begin.

An eloquent example is the application of a smart bracelet that monitors the heart rate - this, logically speaking, does not need access permissions to the photos in the phone or the contacts of the phonebook, and sometimes not even to the Internet when it is not in use. But more often than not, people are used to giving full access to these things without questioning why it is needed, thus opening a gateway to malicious people.

9. IoT has developed a lot in recent years. What news can consumers expect, and what should they be aware of? (e.g., from a security point of view)

IoT is in continuous development, whether we are talking about “pure-blood” products (wearables, mobile devices, sensors) or products that cling to this “smart” trend in order to be more salable (coffee makers connected to the net, thermometers with Bluetooth, etc.). The industry took a bit of a logistical hiatus during the pandemic and is now trying to recover through volume and innovation to return to pre-pandemic conditions.

The good news is that things are moving forward, and for example, this year, we will see the first Matter-certified commercial products. This is a coordinated effort by major manufacturers to unify the world of IoT devices under an open standard that ensures their interoperability. In short, we will soon be able to test IoT devices from various manufacturers that will be compatible with each other with a high level of security without the problem of only buying X solution from Y manufacturer.

10. How do you keep up with technology?

Technology is everywhere; you just need to be curious and ask yourself, “how does it work…” or “why is it like that?” If you watch, ask, and experiment all the time, there’s no way you’ll be left behind with what’s new on the market.

I admit, especially in the IoT sphere, sometimes I buy things just to disassemble them for “reverse engineering” or to “improve” them. Almost all manufacturers have “good” products or families of products that are worth their price and “mainstream” products that are not anything special and that cost-cutting makes simply uninteresting. Recent history is full of more advanced or not necessarily paradigm-changing products (Arduino, Raspberry Pi, BLE, etc.), so these are exciting times to be following tech news every day.