Romanian President Klaus Iohannis is a clear favorite in the upcoming presidential elections where he seeks a new term in office, a poll says. The poll, delivered by IMAS institute and quoted by Europa FM channel, places outsider Mircea Diaconu second in voter preferences. 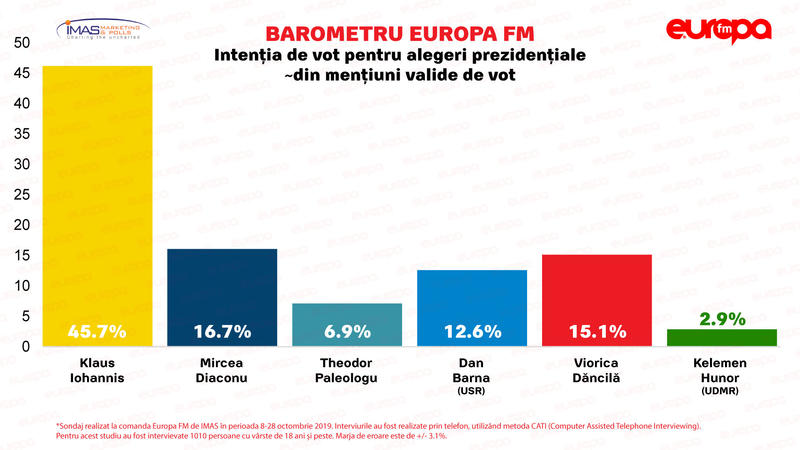 Iohannis would get 45.7% of the votes , followed by Diaconu with 16.7% and incumbent PM Viorica Dancila with 15.1%. The second major opposition candidate Dan Barna (USR-Plus alliance) would come fourth with 12.6%, followed by Theodor Paleologu of the small PMP party with 6.9%. Kelemen Hunor of the ethnic union of the Hungarian Democrats (UDMR) would get 2.9%.

Iohannis has focused his campaign on attacks against Dancila, whose Social Democratic government was dismissed in a censure motion earlier this month.

Diaconu is a retired actor and a former MEP running as an independent with the support of Pro Romania, a small but influential political group formed around ex-PM Victor Ponta, who has attracted a base of supporters from the ranks of the Social Democrats.