​Some 35,000 people joined another wave of protests against Romania's political class in Bucharest and other major cities across the country on Wednesday, showing that the resignation of prime minister Victor Ponta with his government and of a prominent mayor of a Bucharest district was not enough of a change. It was the second night of protests, sparked by public outrage in the wake of a nightclub fire that killed dozens and injured over 100 on Friday - an accident blamed ultimately on corruption and abuse in office. 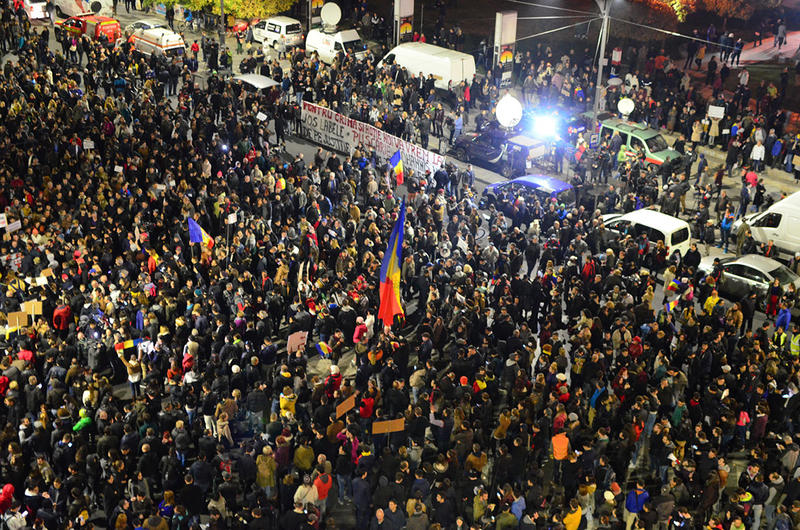 The Wednesday protest was considerably larger than that of the previous day, when 25,000 people took over downtown Bucharest in what was already one of the most populous demonstration against the political establishment since the fall of communism 25 years ago.

On Wednesday, 35,000 people joined the protest in Bucharest alone, as the street movement spread to other major cities across the country, attended by hundreds or even thousands.

Early in the day, in the wake of the Tuesday protest, PM Victor Ponta announced he and his government were stepping down. Later, Cristian Popescu Piedone, the mayor of Bucharest District 4 where the nightclub fire took place, also resigned. President Klaus Iohannis announced in the afternoon that he was about to start negotiations with political parties on how to move forward, as PM Ponta's and deputy PM Gabriel Oprea's parties said they were ready to stay in the government while the opposition called for early elections.

Protesters this evening showed these resignations were not enough to answer public anger about the failures of the political elite over the past 25 years, which have started to prove deadly.

The fire in the Colectiv nightclub in Bucharest on Friday, which killed at least 32, was sparked by fireworks which sparked a blaze that spread fast across the ceiling. The incident showed that the club did not have proper fireproof amenities, which meant it got its permits abusively from the local administration in Bucharest District 4, which ultimately meant an act of corruption. And that happened in a country where a major fight against corruption is currently developing, with resigning PM Ponta himself facing corruption-related charges well before he decided to step down.