Romania's governing Social Democrats are expected to make decisions on Friday on a a significant government reshuffle after the party accepted the resignation of several controversial ministers during marathon talks on Thursday night. The talks are seen as a blow for de facto party leader Liviu Dragnea, who is battling for power with prime minister Mihai Tudose. 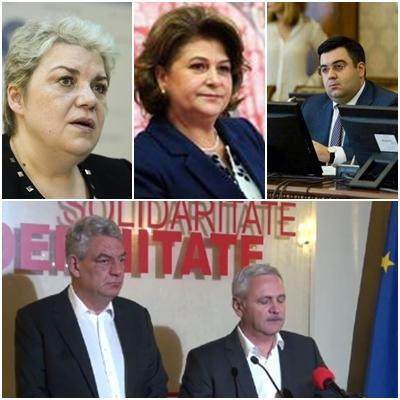 Rifts between the two emerged a week ago and deepened early this week, when PM Tudose said a reshuffle is needed to remove from government a series of ministers, including two of Dragnea's proteges who face criminal inquiries. The two are ministers Sevil Shhaideh and Rovana Plumb, who are suspect in a corruption case related to the transfer of a Danube island in South Romania, which is alleged to have ultimately benefited Liviu Dragnea.

Dragnea himself, already in incapacity to serve as prime minister due to a corruption-related sentence, has been struggling to retain the reins of the party. This included a decision earlier this year to oust PSD's own government due to disagreements with then-PM Sorin Grindeanu over his reluctance to push measures, including ones in support of corrupt officials facing inquiries, as demanded by the party leadership. Grindeanu was replaced with incumbent PM Mihai Tudose.

Now, it was Tudose's turn to face Dragnea, who has kept pushing for such measures. Early this week, the prime minister said that a reshuffle was needed so the suspect ministers be replaced, as corruption-related inquiries are an issue for EU authorities.

President Klaus Iohannis later lent his support for Tudose and the prime minister suggested that he was ready to leave if the party asked him so. Iohannis said that should the government fall again due to internal PSD struggles, that he would see the PSD as incapable for the act of government. That forced the PSD leadership to choose either to accept the reshuffle, against Liviu Dragnea's will, or risk losing the government.

Marathon PSD talks on Thursday evening led to a decision of the leadership to accept the resignations of the two suspect ministers - Sevil Shhaideh and Rovana Plumb - as well as of a third minister, Rasvan Cuc. In an effort to prevent the changes, party leaders considered extreme positions, including a "vote" on whether to accept the resignation or not, according to media reports.

Eventually, they settled to come up and say that the resignations were accepted as the three ministers maintained their decisions due to too much pressure, despite the party wanting them to stay.

PM Tudose and Dragnea stood side by side as the talks concluded. The party leader announced a new meeting would take place at noon on Friday to decide who the new ministers are, while Tudose dismissed claims of a "war" within the party, said nobody won and that he had nothing to complain about the activity of the resigning ministers.