Thousands of people across Romania on Friday joined a novel form of protest - a 15-minute pause in activity, joined by many companies and even authorities, in a call to build long due highways in the country and especially in its Eastern region of Moldova. The "Romania wants highways" campaign was launched by one young businessman from Suceava, NE Romania, who today inaugurated a piece of highway of only 1 meter length which he himself ordered to be built on a private property. 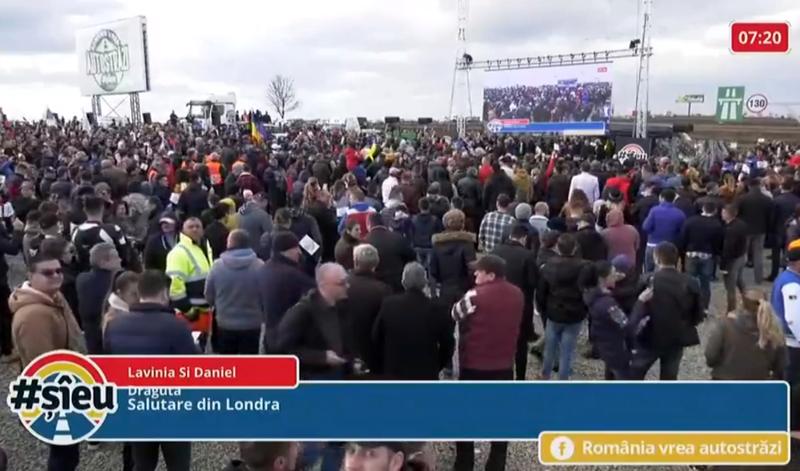 Some 1,000 people attended the inauguration of the 1-meter piece of highway in Suceava, launched by local businessman Stefan mandachi. But thousands of people in many cities including Bucharest joined the movement. Some had called for a one-day strike, but the protest was largely limited to the originally scheduled 15 minutes of "pause" on Friday afternoon.

At the protest in Bucharest, youth formed "lanes" of "human highways". Similar actions were taken in other cities as well.

The protest was joined by many local officials of all political colors, large and small companies and even president Klaus Iohannis voiced his support to the movement in a statement at noon. Officials of the governing PSD party and at least one member of the government also said they supported the action.

But PSD leader Liviu Dragnea blasted the protest as nonsense and criticised initiator Stefan Mandachi for not donating the money he spent on the 1-m highway to children shelters.

And the PSD preceded the launch of the 1m highway by announcing the official launch of a "real highway" near the Moldovan city of Bacau at noon today - despite works there having begun several days ago, after more than a decade of waiting.

"I have never felt such a moment of solidarity. We have a unique chance to restart Romania", Mandachi said at the event in Suceava this afternoon.

Hype about the viral campaign related to the 1 meter highway climbed extremely fast over the past week. It was fueled by people's desperation with the lack of basic road infrastructure in most parts of Romania and long delays in road building under all governments of the past 25 years. And it drew energy from protests against governing party's attacks on the judiciary, its attempts to subdue the fight against corruption, but also major problems with the health system and other basic services for a civilised way of life in many parts of the country.